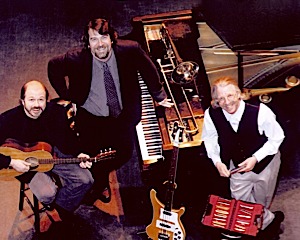 Northern Michigan Events: In baseball parlance, a triple play is one where the defense gets three outs in one play.

Brubeck, the son of jazz icon Dave Brubeck, is one-third of the band, alongside longtime cohort Peter Madcat Ruth and Joel Brown. With Brubeck on bass, bass trombone and the occasional keyboard, Ruth on harmonica, Brown on guitar, and all three on vocals, the group’s sound is hard to define. Making it even harder is the group’s willful genre-hopping, from blues to jazz to Americana and back again.

“There’s a lot of sentiment since Dad passed away for us to honor his music. We play quite a few of Dave’s tunes,” said Brubeck.

But the set list doesn’t begin to stop there. “All of us grew up hearing blues, the Beatles, rock and roll. We touch the Great American Songbook, we also play blues.”

The group’s most recent CD, Live at Arthur Zankel Music Center, is exhibit A for the band’s diversity. It opens with with the blues classic “Rollin’ and Tumblin’,” segues right into “Brother, Can You Spare a Dime,” and Madcat Ruth’s own “Win the Lotto.”

The group is joined by clarinetist Frank Brown (Joel’s father) on Dave Brubeck’s plaintive “Koto Song,” then by Brubeck pere himself for an alternately swinging and rousing “Blue Rondo a la Turk.”

All told, the disc encompasses blues, Americana and classic jazz. Brubeck says he’s proud of the disc and thrilled that the band was able to record it.

“I’m so glad we recorded it,” said Brubeck. “Joel’s father is a great clarinet player. Dad was 89, and the show really tired him out.”

Chris Brubeck credits his upbringing for his lifelong attachment to music. “As a kid, I wanted to do this. It was what my father was doing,” Brubeck said. “His career looked attractive—to bring jazz and happiness.”

He and his brothers found their own way, each opting for a different instrument, though all of them played piano. He still often plays with the Brubeck Brothers Quartet alongside Dan on drums, with Mike DeMicco on guitar and Chuck Lamb on piano.

He furthered his musical career at Interlochen, but got sidetracked from jazz by the popular music of the day. His pal Madcat had something to do with that.

“He snuck onto campus till school was over,” Brubeck recalled with a laugh. His talent not only won over Chris, but recording execs, who opted to produce New Heavenly Blue’s debut disc in 1972. Dave Brubeck also recognized his talent, bringing him along on tours and recording with him as well.

Chris says his trio with the late Bill Crofut and Joel Brown played at Bay View a dozen years ago. Now it’s Triple Play’s turn, and Brubeck promises the group’s show at Bay View will be as eclectic as ever.