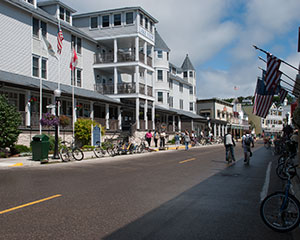 Northern Michigan Events: From a tour of Manistee's ornate Ramsdell Theatre to the patriotic canon firing at Mackinac Island's Star Spangled Fourth, explore the history of Northern Michigan as you partake in an old-fashioned Independence Day.

Fort Mackinac is one of the last remaining all original Revolutionary War Forts in the US, making it the perfect spot to spend the Fourth of July. Starting with the 38 Gun Salute and ending with a Grand Hotel-catered picnic on the lawn, celebrate America's independence at one of Northern Michigan's most pituresque spots. After all of the festivities at the fort, make your way to downtown Mackinac Island to roam through its historic buildings, open for the entire summer. mackinacisland.org/event/fourth-of-july-weekend/

At 10am on the Fourth, watch the annual Flag Raising Ceremony at Glen Arbor's Old Settler's Picnic Ground.

Explore the local, albiet not Revolutionary America, history at Manistee's Forest Festival at the weeklong exhibit- Resorts, Cabins, and Camps of Manistee County (10am-5pm at the Lyman Building). Want to learn more about this Northern Michigan town's past? Take a guided tour of the historic Ramsdell Theatre, famous for its act curtain designed by the set designer for the original "Wizard of Oz" (1pm-4pm on Friday, July 5th).

The boom from the Fourth of July canon fire will probably be heard from all corners of Beaver Island. Still, try to get to the island's little maritime town for the 1pm firing and snag a spot for the Independence Day parade that follows.

Get in the patriotic spirit at the 18th century fort and village over the Fourth. Experience life as it was in the 1700s. Cover your ears when cannon and muskets fired by British soldiers threaten the serenity of life at the Fort. Sew a lavendar sachet, or help colonial women prepare food or tend the garden. Don costumes and join French voyageurs and Native Americans as they demonstrate their way of life – fun for everyone at Colonial Michilimackinac.

2013 schedule of fireworks and parades across Northern Michigan.

2013 Northern Michigan Festivals over the Fourth

Want to know about all the happenings across Northern Michigan this summer? Visit MyNorth.com's Event Calendar!
X
X