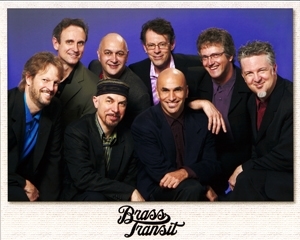 Bay View, the Victorian summer community near Petoskey, Michigan, doesn’t look at all like Chicago, but come July 12 it will sound like it. Brass Transit will play an evening of music made famous by Chicago, the “rock band with horns” on the grounds of the Chautauqua on Petoskey’s  northern edge.

Brass Transit trumpet player and bandleader Tony Carlucci says the entire band is busy in Toronto’s vibrant musical scene. They are all studio musicians but share a love of the band Chicago. “I made sure I picked guys with a passion for Chicago. We never get tired of it,” Carlucci said in a phone inteview from his home.

Just like Chicago, Brass Transit features trumpet, trombone and saxophone with a four-piece rhythm section. Carlucci has transcribed all the music. “We try to do the songbook justice,” he said. “The music is so well-written.  “The vocals are extremely strong,” he continued. “Our lead singer is off the scale. He can sound like anybody. He’s done thousands of jingles. The bass player sings a couple of leads, and we’ve got four backing vocalists.”

The band had its genesis in Carlucci’s experience playing in another tribute band. “About four years ago, I was playing in a Steely Dan tribute band. It was okay,” he said. But as much as he loved the music, there wasn’t that much to it for the horn players.

“My favorite band was Chicago, and I thought, why not just put something together and just have fun? No one is doing it. I put it together and started getting gigs all over.”

In another stroke of good fortune, one of the band’s early shows was at a venue with a newly-installed video system. Carlucci was approached and asked if Brass Transit would mind if their performance was filmed. “The video company needed a guinea pig,” recalled Carlucci with a laugh. “After the edits and some cuts, my son said I should put it on YouTube.”

That was four years and countless thousands of hits ago. Carlucci says the band has far eclipsed his dreams and has played hundreds of shows. What’s more, they’ve garnered accolades and friendships with the band they emulate and that group’s peers. “Chicago is well aware of us. They’ve invited us backstage at shows. We’ve developed a nice relationship.

“Next year we’re working with Blood, Sweat & Tears opening a show. I hope it turns into a bit of a tour,” said Carlucci.

Brass Transit focuses on Chicago’s early years, primarily its first four studio albums. He doesn’t discount the soft rock hits like “If You Leave Me Now” and “You’re the Inspiration” that garnered the band millions in sales in the 80s, but that’s not the material he’s primarily interested in.

A quick visit to YouTube showcases the band in a variety of settings playing “Questions 67 and 68,” “Beginnings,” “Wake Up Sunshine,” “Dialogue Parts 1 and II.”  In all, Carlucci says the band does 40 to 50 shows a year. V

For tickets and additional information for this concert near Petoskey, go to BayiewAssociation.org or call 800.595.4849.