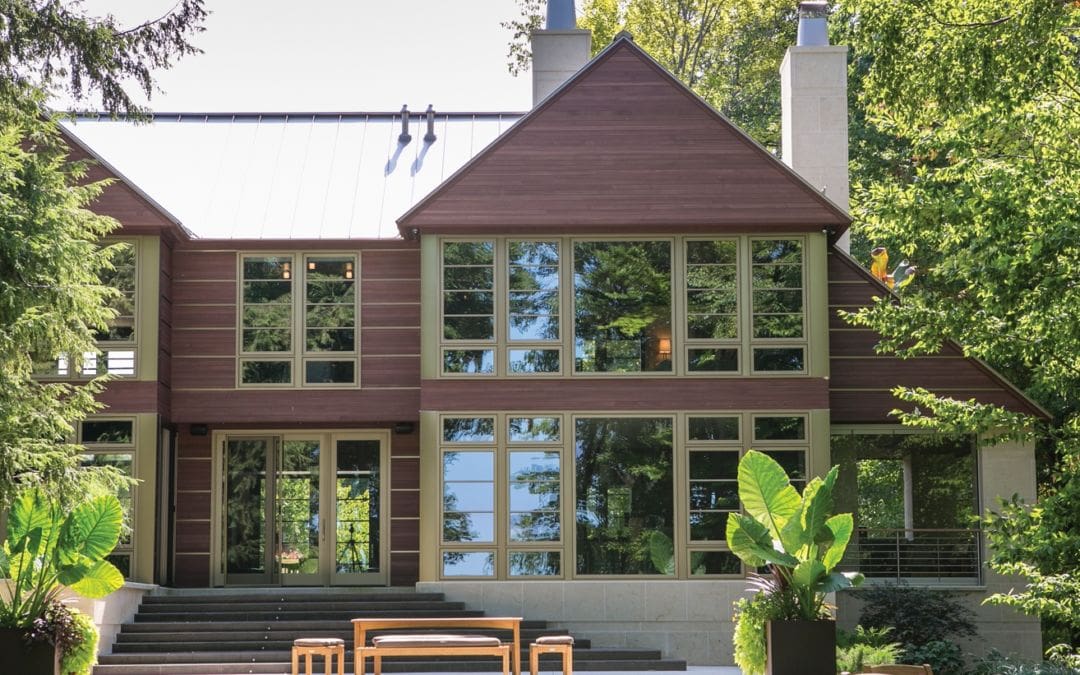 An Eastern-influenced design blends seamlessly into its Northern Michigan setting in this dramatic remodel of an Old Mission Peninsula home.

Mere steps inside the glassy entrance of a hilltop home on Old Mission Peninsula, guests sense that parties here are fun—and frequent. The airy foyer offers a boutique-hotel welcome. The sculptural bar and lounge space extends the notion with a design that encourages mingling and relaxation.

Despite its chic gathering-place ambiance, the renovated two-story house functions most often as a comfortable home for McKeel and Soon Hagerty and their three daughters. McKeel, CEO of Hagerty Insurance in Traverse City, had long wanted a home in the neighborhood where he grew up. Over time, he pieced together four adjoining parcels comprising 40 woodsy and open acres and a 10-year-old house. 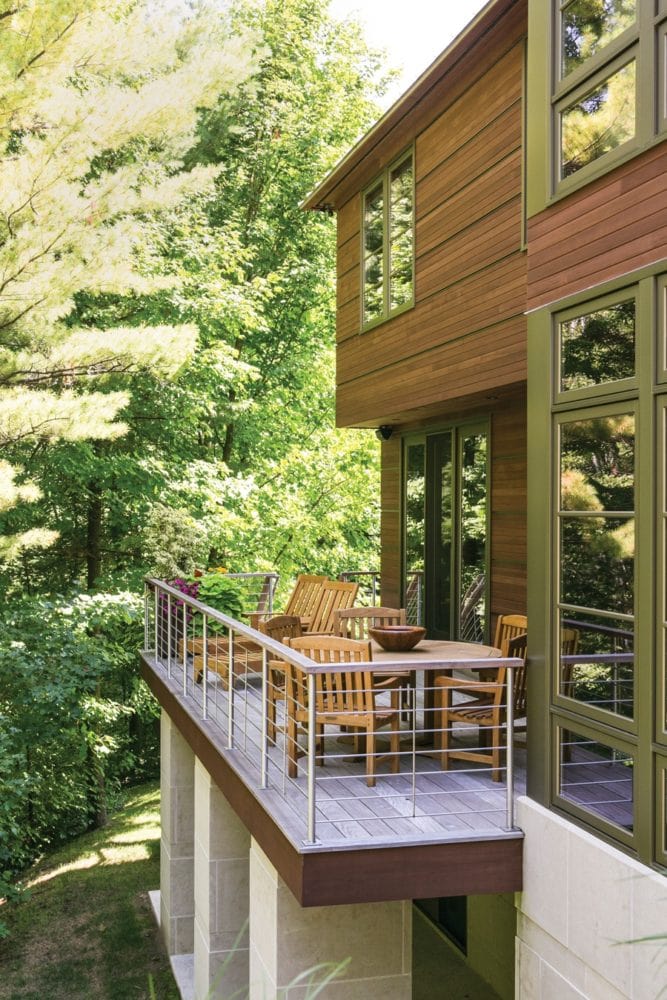 “The house was nicely conceived,” McKeel says. However, the 2001 design lacked the style and space the Hagertys desired for entertaining. McKeel jokes that the idea to expand and remodel actually arose from Soon’s need for more closet space, but the renovation encompassed much more than a deluxe dressing room with bay views. To handle the complex project, the couple relied on architect Bob Holdeman, general contractor Dave Webster and interior designer Scott Lankford. The three worked together in a partnership that Soon calls, “… amazing. I have never seen an architect, builder and designer work so well together.”

The team’s creative synergy was fundamental to the success and personalized look of the finished project. The Hagertys requested a modern look with an Eastern feel inspired by wooden structures they had seen while motorcycling through Bhutan. The team embraced the unique idea. “Everyone got excited and started contributing because they had this opportunity to make something unusual,” McKeel says.

Scott Lankford agrees, saying his best work comes from collaborating with Holdeman and Webster. “We were frustrated by the original house, but Bob worked over a weekend and just nailed the design. The details flowed from there.”

But the team’s frustrations deepened as construction began and workers uncovered structural deficiencies. Webster’s team corrected problems with the foundation and managed to preserve most of the original house.

Holdeman’s design expanded the house to the south and completely transformed its facade using limestone panels, clear cedar and anodized aluminum channels to emphasize horizontal lines. Lankford repeated the linear theme on the interior design of cabinetry, woodwork and glass.

A large entertaining kitchen was important to the couple, who both love to cook. To achieve the desired openness but also maintain a neat, welcoming space, Holdeman drew an open kitchen with an adjacent “working kitchen” where messes are easily concealed behind a storage wall with an integrated door. Lankford outfitted the spaces with his signature clever efficiency, using custom mahogany cabinetry, linear slabs of stone, stainless steel and a sophisticated, neutral palette. The subdued design emphasizes the exotic, fiery cuisine the Hagertys enjoy. McKeel loves to grill even in winter, so Holdeman added a sheltered grilling porch just off the kitchen.

The addition’s second story contains a master suite separated from the children’s rooms by a bridge, one of Holdeman’s signature features. Dark wood, horizontal lines and touches of brushed stainless set a calm tone in the master. Behind a floating fireplace lies a dressing room filled with natural light from a large window overlooking the woods and water. Well-appointed custom storage including a stone-topped island makes the room look like a tiny boutique.

Soon points out that even though she enjoys entertaining, her favorite moments happen when the family relaxes in the living room. She loves the adaptability of the house, the way the scale works for large groups or for their small family. Soon was also impressed with the way the team balanced all of their requests, from her own need for shoe storage to McKeel’s need for car storage (in the form of double garages, one housing a rotating selection of classic cars).

The team also met and sometimes exceeded McKeel’s high standards for construction quality. He points out the painstakingly perfect joinery on the zipper-seamed mahogany panels that define the lounge space and adds, “It’s rare when you’re heavily involved in a project to be more pleased at the end than you expected to be.”

This article is featured in the June 2013 issue of Northern Home & Cottage.