Actor Paul Reiser to Perform at Bay View Near Petoskey 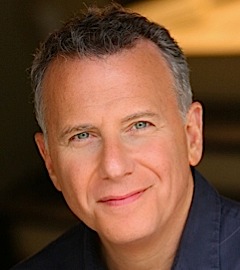 Northern Michigan Events: When Paul Reiser first ventured into show business, he had one goal in mind: to be a successful stand-up comic. “I was 19 or 20, and comedy was as far as I could see,” said Reiser.

Since then, Reiser has expanded far beyond the bounds of stand-up. Most famously, he was the star and creative force behind the hit TV series Mad About You, which also starred Helen Hunt. He’s also starred in movies (Diner, Aliens, Beverly Hills Cop), appeared frequently on the Late Show with David Letterman and The Tonight Show, recorded a CD, toured with Julia Fordham, and written three best-selling books.

But now Reiser has gone back to his roots, honing his comedy act at Los Angeles-area clubs. He brings his stand-up act to Bay View north of Petoskey Saturday, July 6. “About a year ago I started to get the bug,” said Reiser. “I called and said, ‘Can I come down?’ You know you’re getting older when they say ‘Sure, the show starts at 10,’ and I’m thinking, Wow, so late?

“The young comics are asking me, ‘Are you working on a TV special? Getting ready to go on the Tonight Show?’ I say, No this is just for fun.

“After about a year, I said let’s take it out of town. So I go out primarily on the weekends. I’m having a ball.”

Reiser says the performances are a little different than when he was known primarily as a comic. “People know me (from his TV shows and appearances). We all feel like we know each other. It’s like old friends getting together. It seems like a lot more fun.”

Reiser the comic was actually a music major in college (he co-wrote the theme for Mad About You with composer/producer Don Was), and his turns at acting have included comedy, suspense, and drama. As if that wasn’t enough, there’s his writing career, as he’s authored Couplehood, Babyhood, and Familyhood.

While the books are breezy and amusing, they also give a sense of Reiser as a family man. That’s most pronounced in the sections where he discusses his love for his wife and kids and the challenges his older son faces being confined to a wheelchair.

In the books as well as his stand-up routines, Reiser also explores the nature of our shared experiences. He says people enjoy seeing others deal with situations they encounter themselves.  “I’m not smart enough to make anything up. Everything you see is about common experiences. People like to find out they’re not alone. When the audience laughs, they’re saying they’re glad it’s not just us,” Reiser said.

And if the audience doesn’t laugh?

“I just walk over to the sign where it says ‘Comedy’ and change it to ‘Lecture Series.’”

That quick wit is present when he discusses his character Carter Burke from Aliens (Burke tried to kill the other characters and smuggle the deadly aliens back to earth) or his decision to appear at Bay View.

“You say (Burke was) mean and evil, I say misunderstood. He was just doing his job. He’s like a meter maid.”

As for Bay View: “I heard it was really nice in July, but a little breezy in December. That’s why I decided not to do the Christmas show,” he quipped.