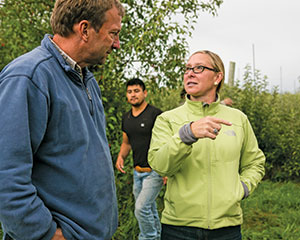 The day after the farmer meeting, April’s warmth and magic light have vanished, replaced by chill and dense clouds smeared across the sky like gray mashed potatoes. A steady rain thumps the roof of Rothwell’s white pickup as she slowly edges along a research center test plot of fruit trees.

She’s reflecting on last night’s meeting and feels a little bad that she had to tell farmers that due to staff shortage and budget cuts, she won’t be able to do farmer meetings—updates on emerging pests and other news—in every member county (Antrim, Grand Traverse, Leelanau, Benzie and Manistee) during the heart of growing season this year. “Normally, we’d get like 65 guys every week in Jim Bardenhagen’s pole barn, and his wife would make two or three kinds of cookies every week,” she says. “Every county has its own culture of farmers.You wouldn’t think so, but it’s true, and you see it at these meetings.” (Standup meetings under the sun at the White’s in Antrim; sit-downs in a shed at Josh Wunsch’s on Old Mission; homemade ice cream and pops at Loy Putney’s near the Benzie-Manistee County line.) You can tell eliminating the meetings genuinely bothers her, and it reveals a trait that people say makes her so effective in her job: she cares deeply about the success of farmers. “I’ll still have one meeting a week,” she says, more thinking out loud than anything. “But only at the research center. I think I’ll videotape it and put it on the web so they can watch it when it works for them.”

She stops the truck beside a bare test plot. “These were plums. I was ready to take them out. We used to grow a lot of plums in Northwest Michigan because you could use your cherry shaker to harvest them, and they’d go to the canned plum market. But the market … well, like who eats canned plums?”

She eases the pickup farther along and stops beside another plot of trees. This one is a test for products designed to naturally bolster a tree’s immune system so it can fend off bacterial canker. The problem is that so far, researchers here haven’t seen great results, and she’s not recommending its use. And unfortunately, there is no other treatment available. “So if you get bacterial canker, you are pretty much screwed,” she says. Farmers can prune infected branches on larger trees, but young trees are often killed. “I think some young orchards got yanked last year.”

A little farther on, Rothwell points out a test plot that is testing 300 varieties of sweet cherries, two trees of each type.

Eventually she pulls up to a patch of ground that is generating a lot of buzz for cherry growers: the high-density test plot. In traditional cherry orchards, farmers plant trees 20 feet apart along the row, with about 20 feet between rows. They wait six to seven years for the first crop, with no harvesting until then. Then the tree hits peak production between years 10 and 22, and then declines to about years 25 to 30, when typically they are pulled out. The most obvious disadvantage of the traditional system is that the farmer has to fund an orchard and then wait six to seven years before earning dollar one. And during those years the farmer is paying to nurture the orchard along till harvest size.

But the trees in this test plot are planted just three-and-a-half feet apart, and the goal is to bring them quickly to maturity and harvest at year two or three, as orchardists do with dwarf apple trees. “The main reason you go to dwarfing systems is they are more precocious, which means they bear fruit a lot sooner with a lot more fruit per tree,” she says.

Rothwell stares out the rain-streaked window of the truck at the rows of young trees and thinks for a moment. “I love this little block,” she says. “It’s part of the orchard of the future.”

Specifically, the experiment is designed to compare how dwarf tart cherry trees will grow on five different rootstocks pruned two different ways. Each tree has hoses running to it that provide water and fertilizer (called fertigation) to speed growth. “What blows growers’ minds about these trees is the sheer size of them at this age,” she says. Though to a casual observer, the scrawny, leafless trees look like little more than sticks stuck in the ground. “They’re maybe five to eight times bigger than normal … but I don’t really know because I’ve never seen Montmorency on dwarf stock,” she says. “I think when growers see this, they’re like, oh, maybe this is possible with tart cherries, so that’s why I think this is pretty exciting.”