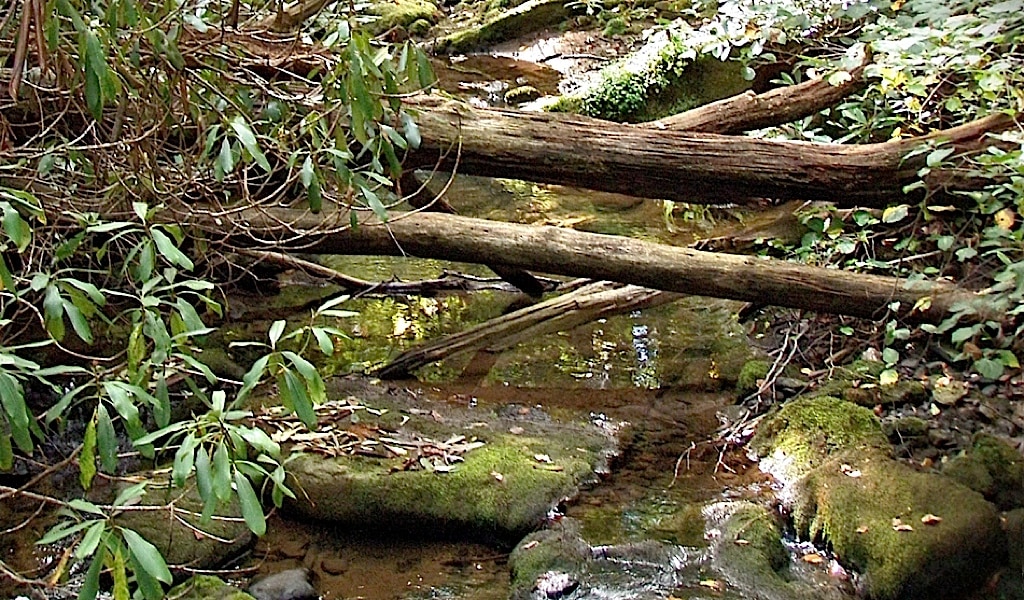 Creek, stream, brook, branch … tiny ribbons of water that lace across Northern Michigan by the multitude, feeding Northern Michigan’s legendary trout streams. The word among fishermen is that these narrow waters are too small to fish. Bob Butz says word is wrong. Here’s his story, starting with a drink.

Plenty of great ideas sparked after a few drinks look pretty stupid later in the cold light of a police station. I can tell you that if it weren’t for a certain cocktail they serve at a certain Northern Michigan watering hole, I probably would never have discovered creek fishing.

Before we head to the bar, however, it would probably be helpful to get some clarity on exactly what constitutes a “creek.” I like to think of a creek as any place you cross with a jump or a couple of gingerly steps without the worry of water sloshing over your hip boots; so shallow and, ideally, cluttered with logjams and fallen trees, that you could never run a canoe down.

Where I grew up in Pennsylvania, this kind of water was the only game in town for wild trout, but only serious fly fishermen ever bothered. The practice of fly fishing small creeks involved the most delicate tackle known to the angling world: one-weight rods; line as fine as angel hair; and flies as miniscule as the period that ends this sentence. Creek fishing took stealth, finesse, acute attention to detail and a certain purity of purpose I admittedly lacked.

I moved to Northern Michigan and took up fly fishing for fun. The fact that I more than occasionally liked to eat the fish I caught guaranteed that I’d never be accused of being a purist. I could see no reason to set foot in a small creek with a fly rod in my hand when the only fish supposedly there are tiny, sublegal brook trout, the sort of fish to be admired and never used as food.

Which brings me back to The Cove. Anyone who’s been to the Northern Michigan town of Leland has at least heard of the Chubby Marys they mix up at The Cove. Basically, it’s a classic Bloody Mary cocktail served with a smoked chub steeping in it—the entire fish, with fins, face and all—alongside a wedge of lemon, a couple queen-sized olives and a crispy Claussen spear.

That fish staring at you is not just for show. Something about the rich spiciness of the drink and the smoky flavor of the meat: the two paired so well together that somewhere between picking the bones clean and calling for a tall glass of something dark to wash it all down, I determined that a smoked chub was so essential to the taste and enjoyment of a proper Bloody Mary that it would only be proper to get out there and try to rustle up some garnish of my own.

In a single summer, I went from never giving creeks a passing thought to fishing them with almost every spare hour. From my wide-brimmed canvas hat and hip-boots, to the fly boxes in my pack filled with tiny, hand-tied ants and mosquitoes, I fit with the image I always had of a proper creek fishing aficionado. But unlike in the books where fly fishing on creeks led to profound metaphors for living and sometimes even the face of God, the only thing I discovered is that I wasn’t very good at it.

For starters, while there are many hundreds of miles of tiny, nameless brooks and runs feeding the legendary trout rivers in Northern Michigan, it wasn’t easy finding the perfect conditions necessary to support fish. Instead of a sandy bottom, you needed a firm bed of gravel riffling with good-moving water. Sometimes slow-moving water was good, too. Sometimes a creek with lots of shade was good, until you started finding fish in the sun.

When I did find a good hole in the forest, it was never much bigger than the hood of a truck. I usually found them by accident, while aimlessly walking along the bank thinking about how it might just be easier to order a few dozen fish from the local smokehouse. I might round a bend and there, a tiny streaking shadow would cut wake toward the high bank, disappearing beneath the snarling roots of a precariously tilting, column-sized tree or some other improbable obstacle where presenting a fly was logistically impossible.

Of course, I’d try anyway, even though seeing fish in this manner also meant they had seen me. Not knowing if the shadow on the water was cast by a kingfisher or a stalking heron, any spooked fish would flatly refuse to come back out. While creek fishing, I spent more hours on my knees than I ever did at church, long spells of waiting and watching for something, anything, to happen.

In his book, Fly Fishing Small Streams, John Gierach called this form of angling frustration a separate discipline within the sport of fly fishing, and warned devotees that getting to a point of proficiency was, indeed, a “real bitch.” Eventually I did catch enough chubs to provide a couple rounds of cocktails. I even refined my technique to a point where I also managed to land my fair share of trout.

Most of all, however, what creek fishing taught me was a new degree of patience I never thought possible. It opened doors into new country I might not otherwise have chanced to explore were it not for the promise of catching fish, however satisfying, however small.

A creek is nothing but a side stream or tributary to a larger river. Anglers looking for small water action in Northern Michigan are fortunate in that any creek flowing into a larger river system has the possibility of holding trout and other fishes.

If targeting brook trout, begin your search by consulting the Michigan DNR webpage dedicated to (search words) “brook trout better fishing waters” Up North. This county-by-county directory of prime brook trout fishing destinations in the Upper and Lower Peninsulas can keep you in streams for a lifetime.

The reach cast, roll cast, sidearm and wind cast. Of all the ways to deliver a fly to feeding fishes none is as basic and, on creeks, more effective than the simple art of “dappling.” To dapple a fly or live bait with a long rod and ultra-light line, simply crawl to the edge of the bank and slowly set the offering on the water and allow it to naturally drift downstream to where fish might be holding.

Regardless of the species of fish being targeted, there is one essential to catching anything in the shallow, crystalline waters found in a typical Northern Michigan creek: Don’t spook the fish. In The Curtis Creek Manifesto, a fly fishing cult classic, the angler and artist Sheridan Anderson offered 11 commandments to help fisherman achieve invisibility on small waters. Here are five:

2. Thou shalt cast with precision and thy fly shalt like a cobweb alight.

3. Let not thy shadow nor that of thy rod fall upon the water.

4.Thou shalt move with stealth and keep thyself low and in deepest shadow and ever secret thyself behind rock, tree, hummock and shrub.