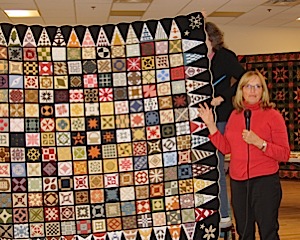 Northern Michigan Living: Among quilters, the words “Dear Jane” do not begin a personal letter.  Rather, they conjure images of 225 geometric designs drawn from a 150-year-old quilt. Hand-stitched during the long years of the Civil War, “the Jane Stickle Quilt” is currently entrusted to Vermont's Bennington Museum and is so highly valued, it is available for public viewing only six weeks each year.

Measuring 80” square, the Jane Stickle Quilt features 169 center blocks, each 4-1/2” square and displaying an original pattern. The large outside border is constructed of cone-shaped triangles bound with scalloped edges, and one corner block is constructed from more than 30 tiny pieces. Those who have done the math report there are 5,602 pieces overall.

Little is known about Jane Blakely Stickle.  She was born in 1817 and though she married, did not have a family of her own.  Researcher and author Brenda Papdakis tracked Jane through census records and surmises that she lived her later years alone in a boarding house. It was in that venue that Jane created her wartime quilt, finishing in 1863.

For quilters the world over, recreating Jane Stickle's masterpiece is the ultimate challenge, akin to a mountaineer climbing Mt. Everest. It's a decision not to be made hastily, and those who take on the project know it will probably take several years to finish.