New Life for a 1930s Craftsman Home in Leelanau County

With vision and determination in equal measure, a Leelanau County couple breathes new beauty into their 1930s farmhouse.

This home was featured in the April 2013 issue of Northern Home & Cottage. Since 2013, Marek and Dan have sold Windy Knob and designed their own home, which pays homage to the area’s farmhouse vernacular. You’ll love that home, too.

You can’t blame the new owners of the 1930s Craftsman home in Leelanau County. It’s the classic Northern Michigan real estate dream—stumble on that affordable, diamond-in-the-rough home tucked into a dreamy setting that includes acreage and a drop-dead view. That’s what happened to Marek Ulicny and Dan Rice, both teachers in Traverse City, whose property search in March of 2007 led them to Windy Knob, an old farmstead that included a circa 1930s Craftsman bungalow, a barn and several even older outbuildings set on 16 rolling acres. The clincher: A Lake Michigan view that fills windows with cobalt blue on three sides of the home. And it was affordable … provided each of them sold their houses. 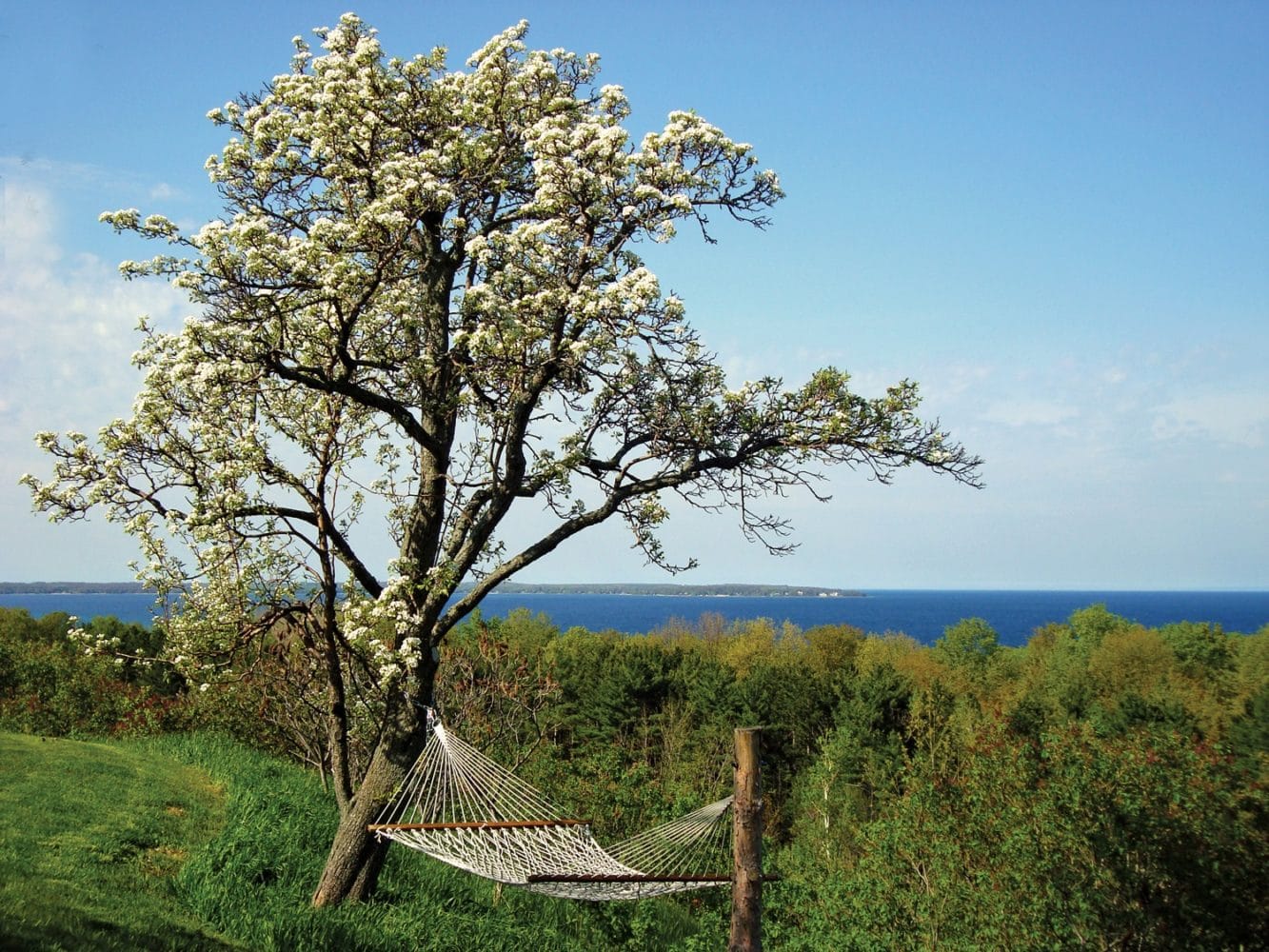 Crossing trembling fingers that the property would still be on the market when they had the cash and credit, they put their homes on the market. The real estate gods smiled: the pair moved onto their new farmstead in May of 2008.

And that was when the work began. The home, which had been last updated in the 1970s and had been most recently used as a rental, needed a major overhaul. “We’ve pretty much tackled every square foot of the place,” Marek says. 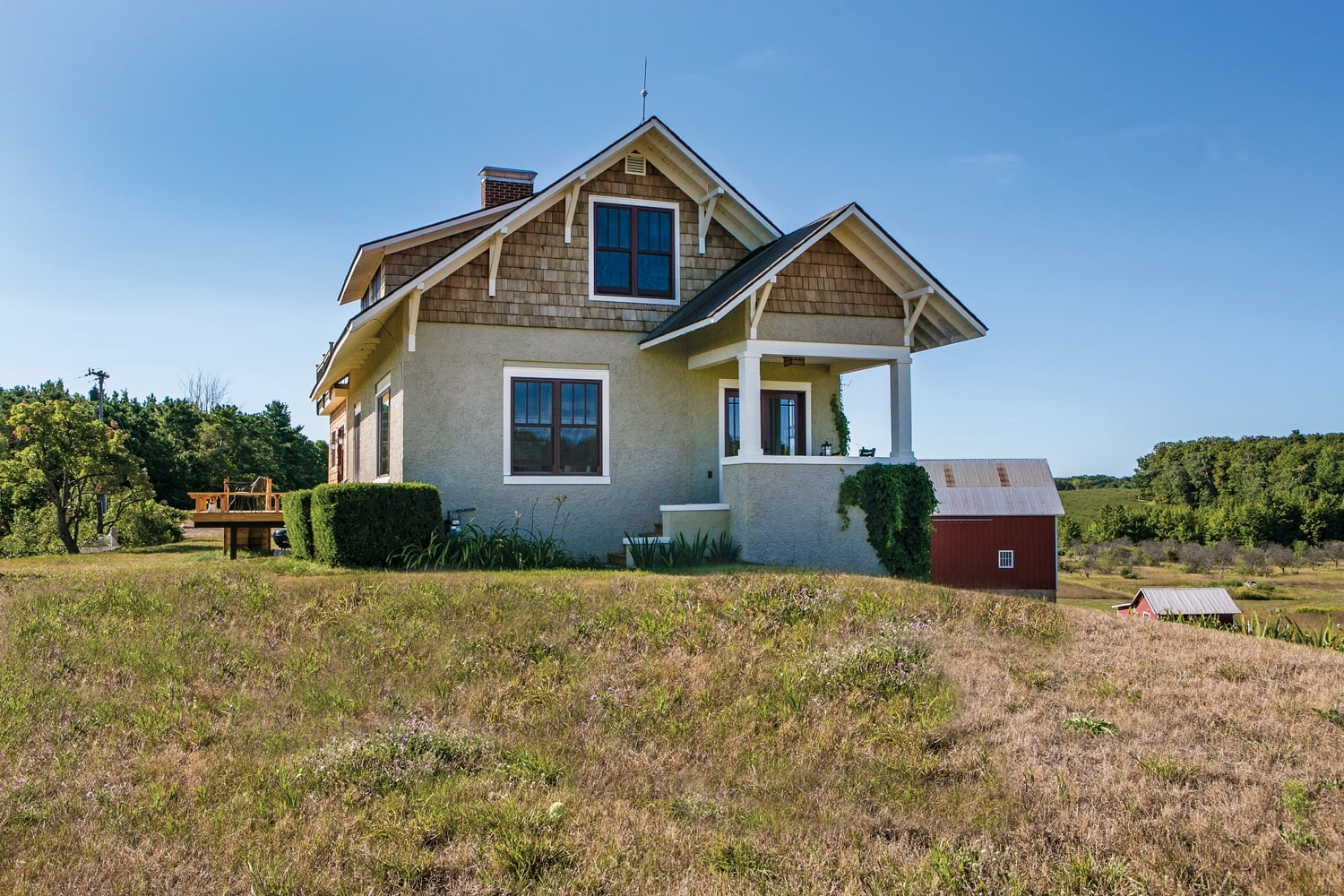 But never once did the two doubt that their efforts would be worth it: the place was constructed like a bunker. The farmer who’d built the home had come from Indiana, where he’d seen how tornadoes could destroy a wood-frame home as effortlessly as if had been made from toothpicks. So he built his Northern Michigan home out of block and cement—Marek and Dan found the old empty cement bags up under the eaves, where the thrifty farmer had stapled them for insulation.

The farmer finished the cement exterior with stucco—aged, by the time Dan and Marek first saw it, to a dingy white that matched faded white vinyl siding on a later addition. With careful eyes to period authenticity, the pair repainted the stucco a pale khaki shade. “We tried to keep the colors true to the ’30s,” says Marek. They also ripped off the vinyl siding and replaced it with cedar shake, a move designed to make the addition look like an outbuilding.

Early on, Dan and Marek became acquainted with the son of the couple who built the farm—an elderly gentleman who still lives in the area and delighted in sharing old family photos of the home. The photos revealed the original windows to have been the Craftsman classic, three panes over one pane. Naturally, the partners tracked down replicas, and installed them. All 22 of them.

The bungalow’s interior was decorated as you’d expect, given the home’s recent history: dark veneer paneling, dated carpeting, mustard-colored countertops in the kitchen and even a tub enclosure in an upstairs bathroom that completely blocked a window. Marek and Dan went to work, replacing kitchen cupboards, plumbing and electrical fixtures, ripping out paneling and replacing it with drywall.

There were delightful, if hard-won, surprises along the way. After removing two layers of carpet and a glued on pad (inch-by-inch with a wallpaper steamer, chisel and sander) they unearthed the original heart pine floors. Working in an upstairs bedroom, the couple noticed brick underneath the chipped stucco walls. Further investigation yielded the backside of the living room fireplace chimney—plastered over long ago. Now uncovered, the bricks are a handsome architectural element in the dining room and the bedroom above. Finding that the original, formal living room entrance had been walled over, they opened it back up again for access to the old front porch—now the perfect place for cocktails at sunset. 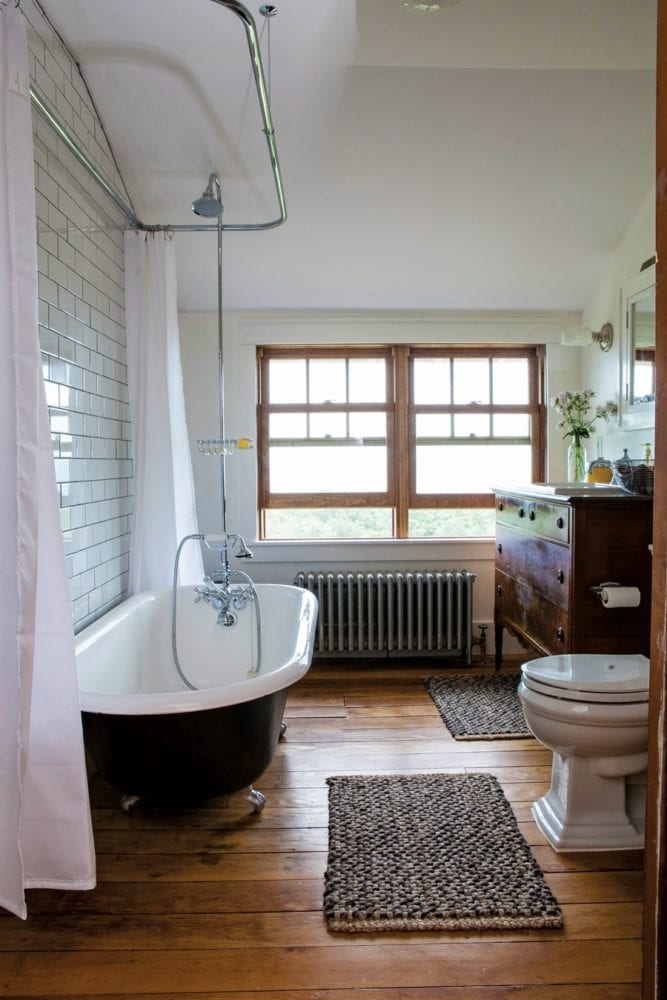 But the pièce de résistance just may have been removing that tub enclosure to find that the bathroom window perfectly frames Gull Island, a tiny, storied isle near Northport.

In the kitchen, white subway tiles, black soapstone and mahogany-stained butcher-block countertops create a materials scheme that is simultaneously contemporary and honest to the home’s history. The view from the back of the kitchen is of the home’s pastoral side: a sturdy old red barn that Marek and Dan stabilized; a cobblestone pump house; rolling fields where Marek’s Clydesdale grazes. 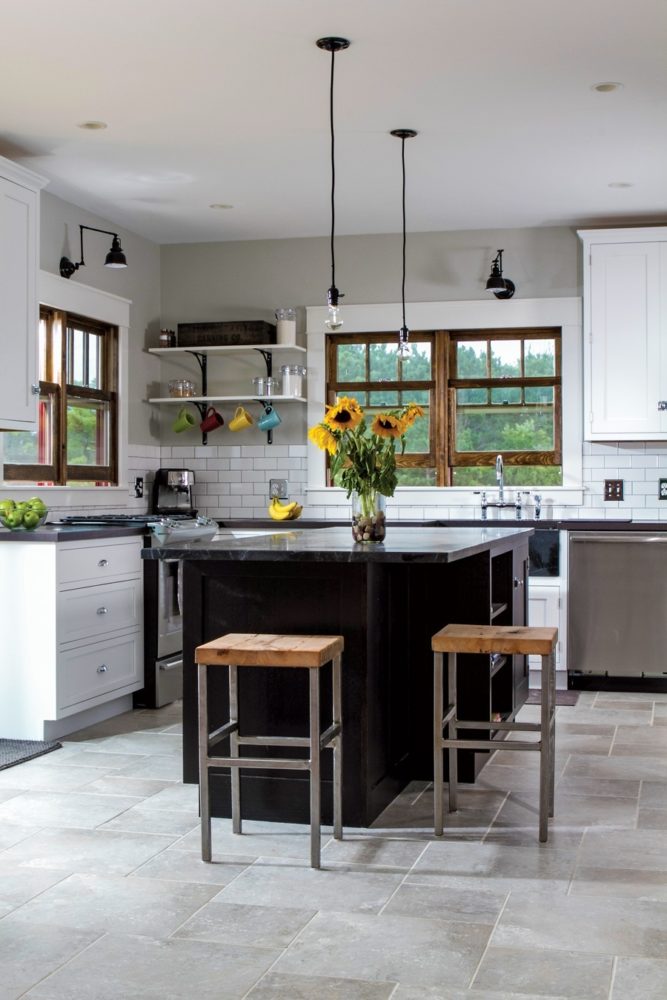 No one could blame the partners for trying their hands at farming, and so for several years they raised chickens and sheep—selling eggs, wool and grass-fed lamb. Unexpectedly last year, a farm in Wisconsin offered to buy their entire flock of sheep. The partners agreed to sell, and then went ahead and got rid of the chickens as well. Being true to the spirit of an old farmstead is one thing; carving chill-time to soak up one of the most spectacular views on the Leelanau Peninsula, well that’s quite another. 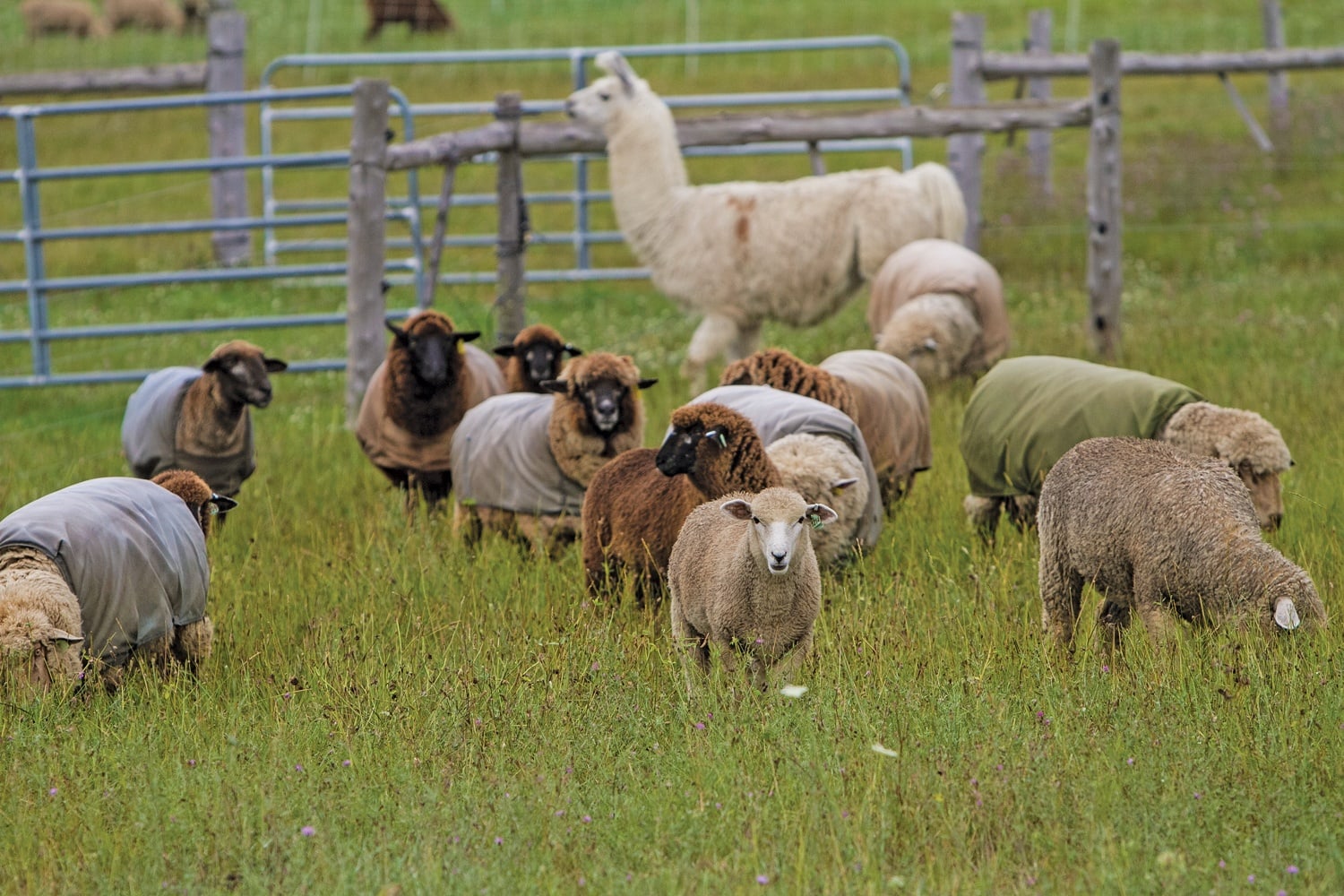 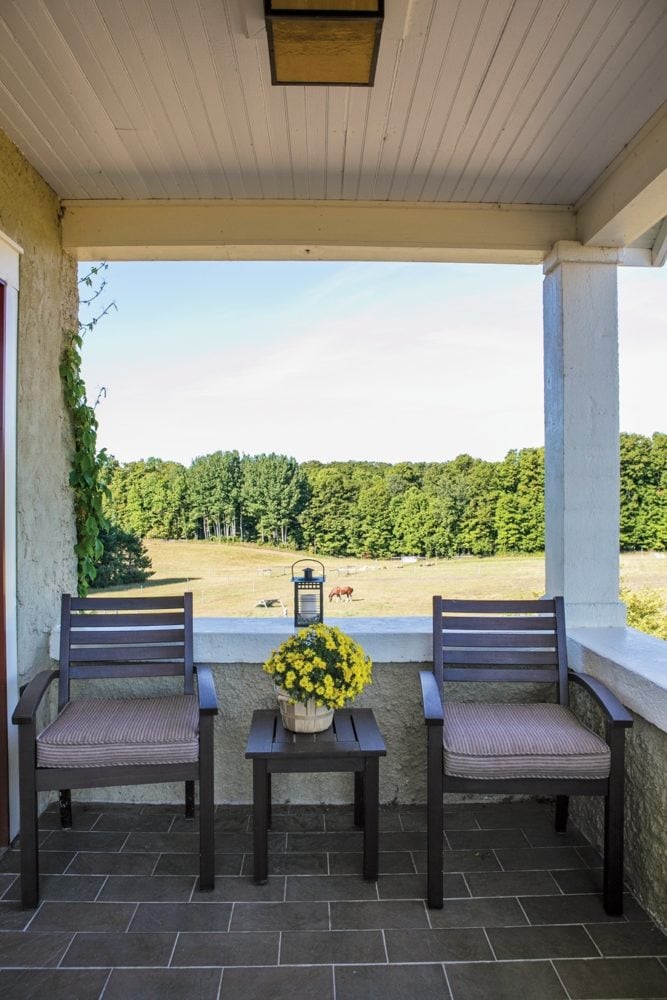