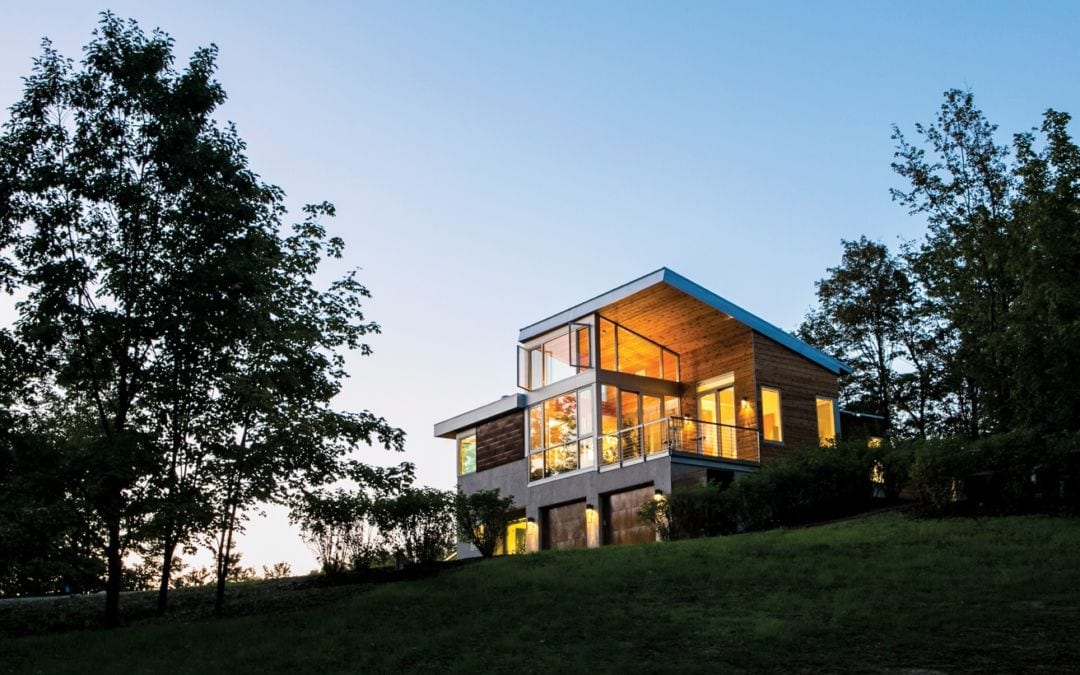 Steel and glass come together in surprisingly organic fashion in a hillside home on Old Mission Peninsula.

This home is featured in the April 2013 issue of Northern Home & Cottage, a bi-monthly home publication included in all subscriptions to Traverse, Northern Michigan’s Magazine. Subscribe! 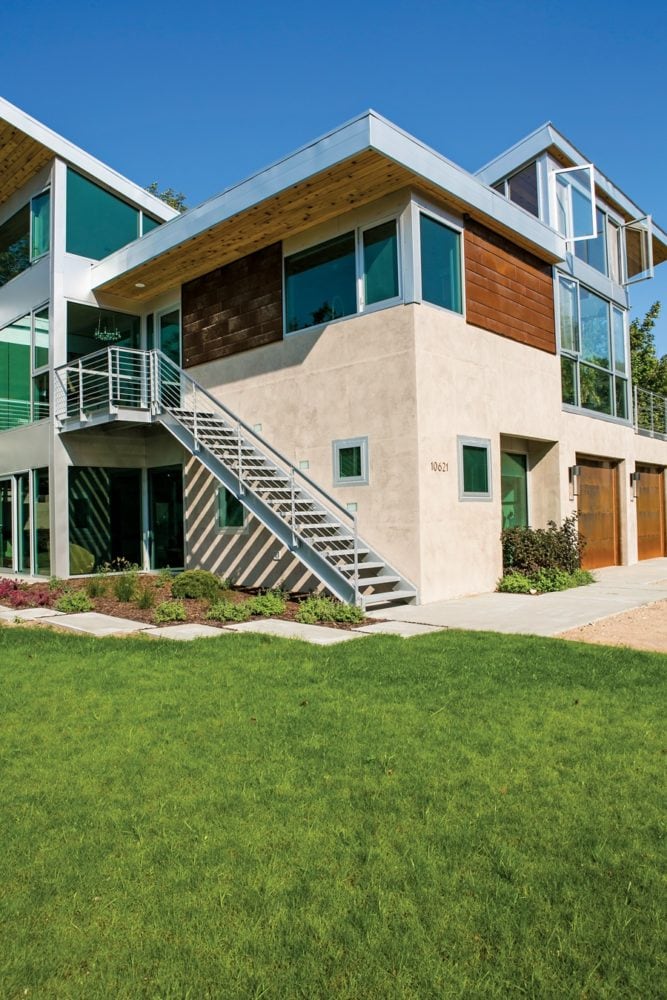 The towering greenhouse (windows open) was the starting point for a modern plan with a combination of flat and angled rooflines.

Leafy tomato plants dotted with green and crimson-ripe fruit look out of place against the arctic backdrop of a 3-degree January day on Old Mission Peninsula. But here at Nathan and Stephanie Schultz’s new home, the juxtaposition is not surprising at all—it’s the very intentional product of architecture designed to enrich the lives of its inhabitants.

Architect Ray Kendra of Environment Architects in Traverse City says that the plan for the modern hillside structure grew from its southeast corner, where he placed the couple’s greenhouse to capture the sunlight that feeds lush beds of vegetables all year long. The greenhouse is just one way the architect blurred the lines between the home’s minimalist indoors and its woods-and-water outdoors.

In 2012, the Schultzes moved from small quarters in urban Los Angeles to this rolling 42-acre parcel that rises high between East and West Grand Traverse Bays north of Traverse City. They wanted a major change, and they craved space. Accordingly, the 3,750-square-foot house has a wide-open floor plan and three patios that extend the living areas in the warmer months.

“We eat dinner out here most nights in the summer,” says Nathan of the wide bay-view porch that’s set behind an accordion-folding glass wall off the living room. The sheltered, concrete slab has sunset views and a fireplace that beckons even in the shoulder seasons. A ground-level patio off the daylight basement and a sunny deck off the guest room fulfill the need for what the architect calls “outdoor experiences.” 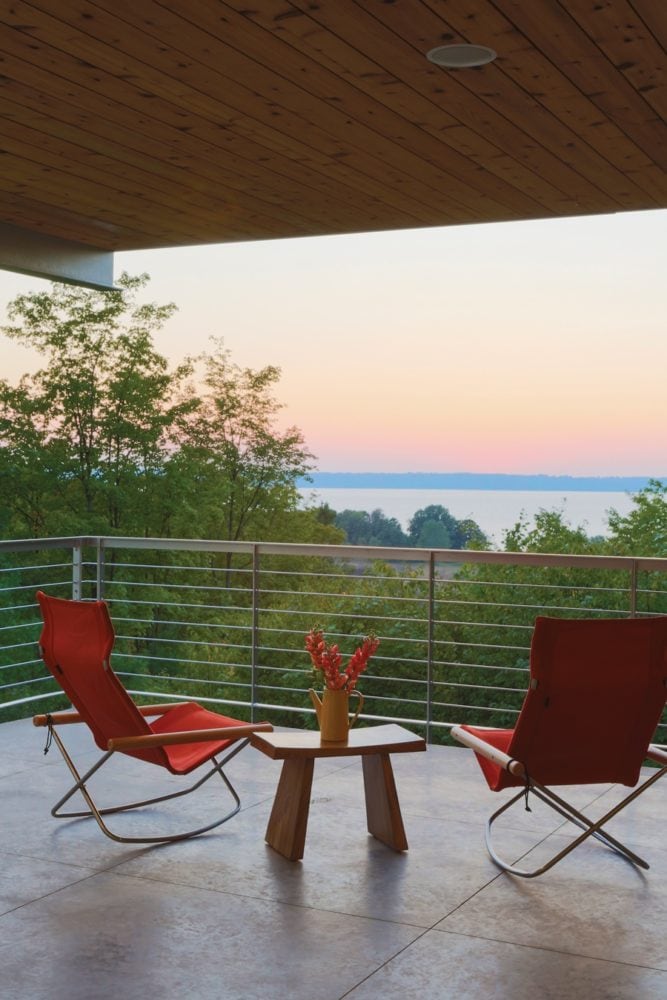 Kendra’s philosophy harmonized with Nathan and Stephanie’s vision of a secluded, modernist house where “the views are the art,” says Nathan. “We didn’t want a lot of walls. We wanted to emphasize the trees and seasonal changes and let that be the art.”

Glass wraps the open living and dining space on three sides, and a high, bayside peak allows daylight to suffuse the airy space. Kendra designed the interior with quiet simplicity to direct attention toward the views. White paint covers the sparse wall surfaces, subtly accented by floors of taupe-colored, smoked white oak, and offset by sleek, trim-less windows. A natural fireplace is trimmed in stainless steel over a poured-concrete hearth. At the opposite end of the house, the island kitchen balances the look with the same stainless-steel accents but is warmed by an alder “canopy” that lowers the ceiling and subtly separates the cork-floored space. 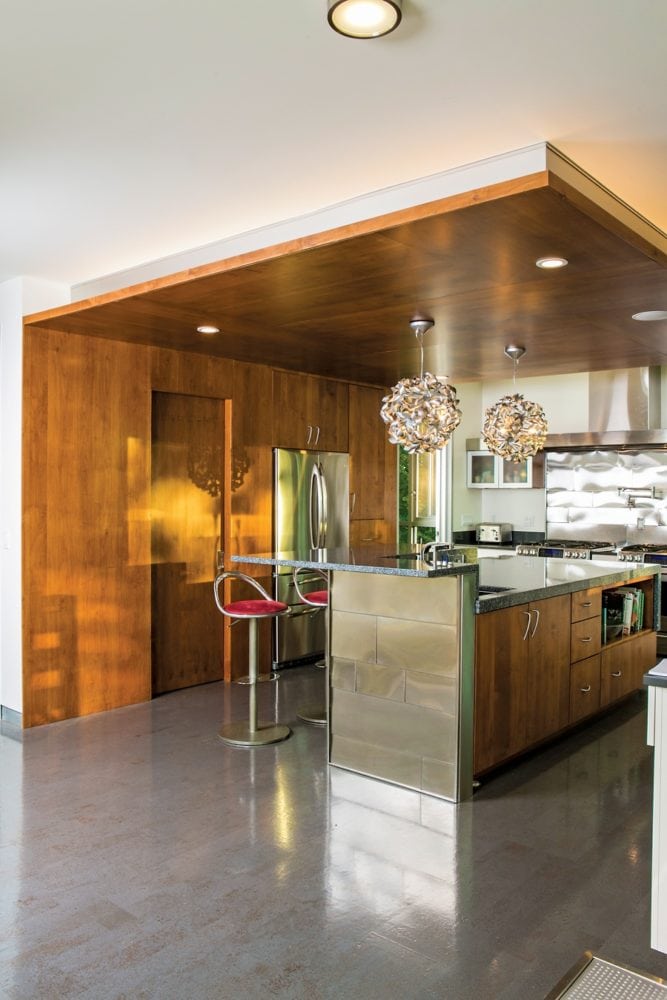 Interior materials relate to the exterior, establishing an indoors-out connection. Kendra clad the structure with surfaces that would look appropriate in the woodsy setting. The geometric masses of the house reflect the contours of the site’s topography and have a textural rhythm arising from a careful arrangement of natural cedar siding, concrete, stainless steel and Cor-Ten steel shingles. Cor-Ten, a brand of weathering steel, is an alloy engineered to oxidize quickly, eliminating the need for paint or weatherproofing. It develops a protective, rustlike patina after just a few months of exposure.

The Cor-Ten shingles also appear inside the greenhouse, where the protection of the glass slows the weathering process and allows the steel to evolve like an organic piece of art—rather like the tomatoes gradually blushing under a cold Northern sky. Within the right environment, everything flourishes.

The island-kitchen is ideal for cooking with friends and family. A glass door leads to the greenhouse just steps from the double ranges. 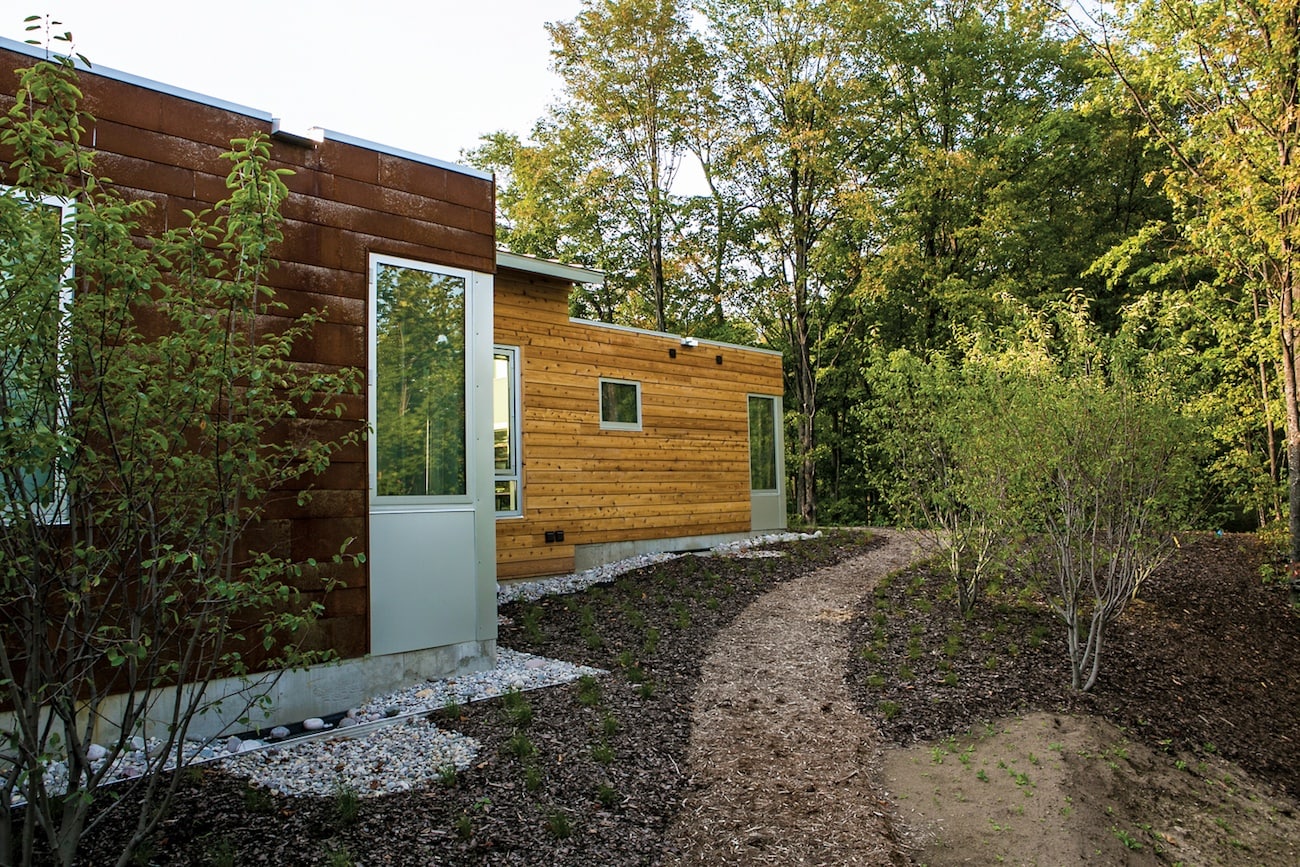 Kendra designed rooflines to capture rainfall for irrigating a garden planned in the backyard. 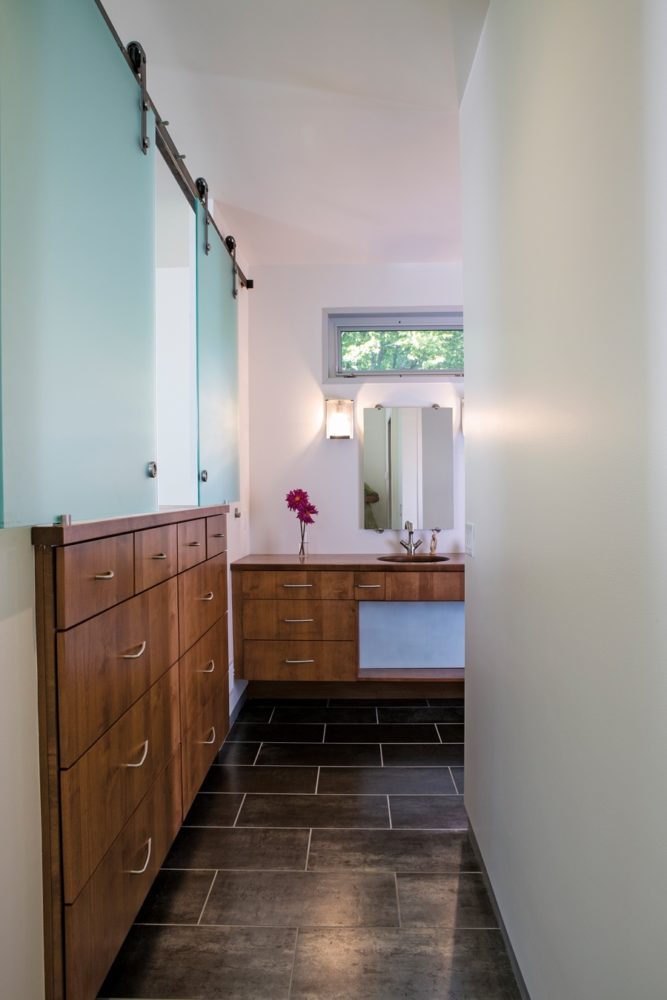 A built-in bank of drawers and frosted-glass barn doors divide the master bedroom from its open bath.