Announcing the MyNorth Winner of the Northern Michigan Spa Prize 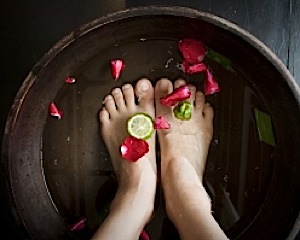 That humble and candid response was the email reply from Leah Richardson after we announced her big win from MyNorth Media. The prize? $500 in Northern Michigan spa treatments, including four $125 gift certificates to Lilac Tree Spa, Solace Spa, Crystal Spa, and The Spa at the Inn at Bay Harbor.

We called Leah at her downstate home in Holly, Michigan for a quick chat on her pampering days ahead. What do you do when spa cash is burning a hole in your pocket? You get Up North!

So for a first time winner at anything, you sure hit the jackpot! Where did you hear about the contest?

I've been a subscriber for probably two-ish years. And, this is embarrassing, but with any magazine I take my chances and scan the QR codes on the cover. Literally, every single magazine. How cool that this one time it came through!

Well you were due for a big win. What's the first stop for celebrating?

I just can't tell you how well this all worked out. When my daughter was three years old, we took her to Mackinac Island. She's eight now, but since that first trip, I've been wanting to plan regular mother-daughter trips up there. With the Lilac Tree Spa being on the island, what a great excuse to make it happen!

Love it. So is your daughter trying to cash in on the prize?

As a matter of fact, yes. My eight-year-old wants a pedicure. I don't even know where she gets this stuff.

But what about you? Any treatment you're looking forward to?

Oh, a little bit of everything! I've never had a facial, so what better time to try it out? A massage or two will definitely be in the picture… You know when your shoulders feel like one big piece of cement? [laughs] And just like my daughter, I'd like to get my nails done. I hear Crystal Mountain uses organic nail polishes, so I've got to get over there and see the difference.

It sounds like you're not one to regularly pamper yourself. What other activities bring you to Northern Michigan?

You know, there is such a draw to come Up North, it's a real pull that I can't describe. When my husband and I have the chance, we love that we can take a day to escape for an afternoon hike and still get back downstate that same night. We show pictures to friends of Pierce Stocking Drive and the Sleeping Bear Dunes… And I swear, people guess it's the Carribbean. It's just so beautiful year round and we try to get up there for any reason at all. Now I have $500 in reasons.

Want to be our next big winner? Enter here for a chance at a Northern Michigan summer family vacation at Mount Bohemia!
X
X