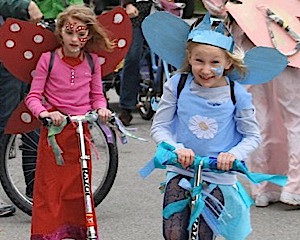 Northern Michigan Events: Before we know it, Earth Day April 22, 2013 will arrive in Northern Michigan! Celebrate the day with Little Artshram of Traverse City and these upcoming April events:

April 6th, 7th, 13th and 14th: Two weekends of open workshops, to build your mask and costume and help with some of the BIG puppet and non-motorized float construction. Saturday sessions are: 10 am-12 Noon, and 1 pm-3 pm
Sunday sessions are: 1 pm-4 pm
Blackbird Arts is located at 1485 Barlow St, Traverse City, Michigan 49686
We ask folks to give a $10 Suggested donation per mask/costume at any of our workshop locations to help offset costs of supplies and materials. We also suggest you call in advance to register: 231-735-8370 info@littleartshram.org

Be a part of the Earth Day Parade! Volunteer Opportunities Abound!

Little Artshram would love to have you become a part of this year’s Earth Day Parade in Traverse City, Michigan! It all takes place Saturday, April 20. The troops will gather at Oryana at 11:30am and officially begin the parade at 12:30pm. Parade building workshops have begun and could use many hands to make good work! Additional shifts will be added as the parade approaches, so please check back frequently!

You can see what’s ready and waiting for you and sign-up lickety-splickety- quick by going to the parade volunteer link or by calling (231)735-8370.

Yes, it takes a WHOLE village to build an Earth Day Parade!…..here are a few descriptions of the opportunities offered:

?Parade section leaders work with the Parade Artistic Staff (teams of 2 or 3 folks) and are skilled or willing to learn the skills of helping build a parade section including: masks, costumes, BIG puppets and non-motorized “floats”.

Parade section assistants work with the parade section leaders (teams of 2 or 3 folks) and are skilled or willing to learn the skills of helping build a parade section including: masks, costumes, BIG puppets and non-motorized “floats”.

We need crew members in each of the parade sections to help build the puppets, masks, costumes and non-motorized floats.

?The “performance” IS the parade—ours is a storytelling parade, divided into 5 sections. This crew of folks, will wear, carry, push, and animate our other than human-species BIG back-pack and three-pole puppets and masked/costumes and non-motorized floats.

?Musicians, drummers, chanters, singers are needed for five (5) parade sections. The parade section bands come up with clever plans for music, singing, chanting and general jolly-parade-bally-hooing in each of the five sections, keeping the rest of the paraders’ feets movin’ to the beats! Help the parade artist crew design and produce music-making instruments in the public workshops.

Workshop assistants are scheduled at each of the parade building workshops, which will happen on Wed/Friday evenings, and Saturdays and Sundays during the day, asking folks to commit to 4 shifts. Shifts begin Saturday March 30th through parade day.

A Parade Street Patrol on Parade Day….Our dear friend Reni Dengel, who just passed this year, used to head this task up on his roller blades, along with a handful of others who help us keep our parading crowd safe in the streets. We will also need this Parade Street Patrol to help set-up and organize our new location of parade-startup @ Oryana, and help direct parade parking away from their parking lot.

The Bike Marshall will work with the Parade Patrol on parade day (April 20th) helping to smoothly coordinate and integrate the Bike Brigade which will be arriving from NMC campus into the parade line-up and continue to “marshall” on their bike throughout the parade. Meetup—Tuesday, April 9th @6 pm

We have a special need each year to examine and repair our dear old puppets that make appearances in our parade year after year. This will involve paper maiche repair—possibly some re-engineering of back-packs/and-or pole design, as well as, costume repair or re-design.

Help gather, organize and set-up a parade merchandise table at the parade-line-up site on Saturday April 20th @ 9:00 am 1:30 pm; and help move it to NMC campus after the parade @ 2:00 pm at the after-parade celebration with the Dirt Fest @ the NMC Welcome Center.

Help gather, organize and set-up a parade day WELCOME! table at the parade-line-up site on Saturday April 20th @ 9:00 am to 1:30 pm; and help move it to NMC campus after the parade @ 2:00 pm at the after-parade celebration with the Dirt Fest at the NMC Welcome Center.