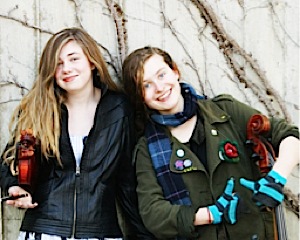 Northern Michigan Music: Creating their second album is no accident for Katie Larson and Savannah Buist. Just the opposite, in fact.

“This (recording) is more intentional,” said Amber Buist, Savannah’s mom and unofficial spokesperson for the duo. Just over a year after first making music together, The Accidentals, as they’ve dubbed themselves, are recording their second album, Bittersweet.

For the project, they enlisted the aid of producers Paul Mahern and Rob Feaster and recorded in Indianapolis and Nashville along with Traverse City.

But recording with the pros isn’t cheap. So the duo has turned to the online social funding site Kickstarter to raise the money needed to finalize the disc.

And in just a couple days, the group had already raised nearly $3,000.

The need for funding was a result of the duo’s desire to make the jump to professional recording for the second album. Amber suggested they look for producers who worked on albums and with artists they admired.

Much to her surprise, and that of the girls, the first two producers they contacted jumped on board. These weren’t just any producers. Mahern has worked with John Mellancamp, The Fray, and Iggy Pop, among others, while Feaster has produced recordings by No Doubt, George Harrison, Bruce Springsteen, Peter Gabriel, and others.

But with pros, there came costs. In addition to the producers, there were studio fees, as well as the cost for additional musicians, mastering, graphic design, and packaging.

Hence the decision to turn to Kickstarter. Kickstarter is an online method of funding for everything from films, games, and music to art, design, and technology. Since its launch in 2009, more than 3.8 million people have pledged over $562 million, funding more than 39,000 creative projects.

Each project is independently created. Project creators set a funding goal and deadline. If people like a project, they can pledge money to make it happen. Funding on Kickstarter is all-or-nothing–projects must reach their funding goals to receive any money.

So there’s a possibility this project could languish if The Accidentals are unable to raise the full $11,500 goal by Monday, May 6, at noon.

But none of the negative thought here. Amber said she’s confident the twosome will reach the goal. “After getting a $1,000 pledge, we thought, this might actually work!” she said. “Now I have no doubt.”

While Larson and Buist may be new to Kickstarter, the two have over a year of experience to lean on as songwriters and performers. They first made music together when they were the only two musicians in the school orchestra to volunteer to perform for a music boosters meeting.

They’ve since gone from playing in the high school orchestra program at Traverse City Area Public Schools to performing at festivals, opening for the likes of Andrew Bird, and recording their first CD, Tangled Red and Blue, which they did just two weeks after having started writing together.

Now it’s off to the races, kicking things off with the Kickstarter fundraise.

For information on the Accidentals, go to their website at MoreAccidentals.com, check them out on Facebook, or make a donation at the group’s Kickstarter page (kickstarter.com, search Accidentals).

Get more Northern Michigan music and events on the MyNorth Events Calendar and MyNorthTickets.com.
X
X