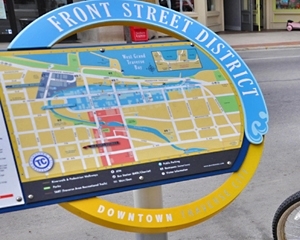 Northern Michigan Events: Don't wait on fun while you wait for the weather! You're only clicks away from getting tickets to great Northern Michigan events. Check out what's happening in our small towns—from cooking lessons to concerts, there's an event for every one.

The HAP Presents The Sound of Music on Stage at St. Francis

The final collaboration between Rodgers & Hammerstein was destined to become the world's most beloved musical. When a postulate proves too high-spirited for the religious life, she is dispatched to serve as governess for the seven children of a widowed naval Captain. Her growing rapport with the youngsters, coupled with her generosity of spirit, gradually captures the heart of the stern Captain, and they marry. Upon returning from their honeymoon they discover that Austria has been invaded by the Nazis, who demand the Captain's immediate service in their navy. The family's narrow escape over the mountains to Switzerland on the eve of World War II provides one of the most thrilling and inspirational finales ever presented in the theatre.

Carolyn Leonhart is a jazz singer with one foot firmly planted in the rock/pop universe.  She is the daughter of veteran bassist Jay Leonhart, so her jazz sensibilities flow from her upbringing. She gained wide exposure during the 90's as a backup vocalist for the reunited Steely Dan.  Her jazz style is tinged with the edginess of a soul or R&B singer.  "That Carolyn Leonhart can hold her own as a superlative vocalist is undeniable," Christopher Loudon, Jazz Times.  This concert is produced with the Wharton Center at MSU.

Miriam and David have been dazzling audiences together since 2007. They have performed at the Truman White House in Key West, and have been invited to perform at the prestigious Sanfillippo Estate concert series near Chicago in June 2013. They regularly perform at Phil’s On Front in Traverse City on Thursday nights. They have recorded 2 CD’s together, including “S’Bout Time”, and “Somewhere Only We Know”.

The unsettling and tightly crafted tale of The Pillowman is not for the faint of heart. In an unnamed totalitarian state reminiscent of the Eastern Bloc, Katurian, a writer of grisly short stories, has been arrested because his plots resemble recent murders. Comedies don't come darker than this and audiences will be drawn in as the story twists and turns in McDonagh's well-spun script. Nervous laughs will trail into gulps and gasps, as Katurian struggles to find what is real, faces his seemingly inevitable execution, and attempts to save his stories from destruction.

Fans of GAAA’s Readers’ Theater are familiar with classic who-done-its from past Sherlock Holmes shows. Put that genre in the hands of director, Mason Query, and things get a little… twisted.  Ms. Query will lead an all-local cast a double-header: “The Circus Train”, from the Ellery Queen series, is an interactive detective tale featuring a giant, a midget, a fortune teller and murder, of course. Rounding out the evening is a sci-fi thriller from The Mysterious Traveler series, “The Ugliest Woman Alive”, where things are never as they seem.

The Reader’s Theater concept involves actors performing adaptations from novels, radio or screenplays using only their voices and facial expressions to convey the story to their audience. There are no sets, costumes or props. There is also no memorization required.  In less than two seasons, Readers’ Theater has grown from a one night performance to three. Although performances will continue to be free of charge, a reservation is now required to guarantee seats.

Reserve now by contacting Teddy House at teddyh@centurytel.net for performances on Friday.

Good On Paper Comedy Improv at the Old Town Playhouse

Each scene in the Good on Paper show begins with on-the-spot audience suggestions and audience members are also asked to contribute words and phrases to the "can-o-words" which troupe members draw from throughout the one hour show.  The jokes are fast and furious, and the cast is quick and witty.   Complimentary coffee and donuts are available at each performance.  Adult humor.

This “Renegade Sorority” of modern women vow to age gracefully – but refuse to go quietly as they continue to showcase their “BABES” signature brand of estrogen-infused mayhem and award winning song writing. Their collective mid-life Crises and the inherent need for mid-life vices are set to music in a hilarious new stage revue that examines the lives of the boomer generation, as they find self-acceptance,grace and humor. Know you are not alone on this winding path we call life. Welcome to “Mid Life Vices” a celebration of “Whine, Women and Song!” Click here for a preview.

The Zonta Club's annual Father-Daughter Dinner Dance is an event that makes memories that will last a lifetime. This magical evening is a celebration of the special bond fathers and grandfathers have with daughters and granddaughters of all ages.

Similar to a high school prom, girls often spend the day preparing their hair and nails, and choosing the perfect dress. Dad is busy dressing in his tuxedo or best suit and practicing the dance steps he has long forgotten.

The doors open to a magical venue where dads and daughters receive corsages and boutonnieres and of course, pose for pictures. A word of caution for dads and grandfathers…come to this party well rested! We can guarantee, daughters will not sit down following dinner and dads will be taking off their ties and sport coats, trying to keep up with the younger generation on the dance floor.

Black Star Farms Invites You To The Jazz Café

The Inn at Black Star Farms invites you to Jazz Cafe, a new series of concerts in the Aquarius Room featuring popular local musicians including Mike Davis, Ron Getz and Jack Dryden.

Warm up by our fireplace and enjoy the relaxing atmosphere at these midweek concerts beginning at 7 pm. Wine, brandy, draught cider and specialty Black Star Farms cocktails are available from the bar as well as bistro style small plates.

Learn some of the endless possibilities of the book structure in this two day class taught by Linda Gardiner. Several sewing techniques will be covered – from a simple pamphlet book that can be used to create cards, to making book covers, creating a text block, accordion and “meander” folds, and books with and without spines. There will be many examples of traditional and nontraditional “artist books” to inspire you.

Join guest Tom Toomey for a unique presentation on Afghan students:  how they are chosen to study abroad, how the experience shapes them, and what happens when — and if!— they return home.  Tom Toomey has worked in international exchanges for the past 20 years, focusing the last eight on Afghanistan.  Tom is finishing a book about his experiences in Afghanistan that examines how the exchange experience has affected Afghan students and their views on religion, culture and being Afghan.  A first-hand view of a critical cultural issue — don't miss it!

The three-time Grammy-nominated Cuban music group Tiempo Libre, is one of the hottest young bands today. Equally at home in concert halls, jazz clubs and dance venues, Tiempo Libre’s Miami-based members are true modern heirs to the rich tradition of the music of their native Cuba. Classically trained at Cuba’s premier conservatories, today the group is a hit in the U.S. and abroad, celebrated for its sophisticated performances of timba, a joyous mix of high-voltage Latin jazz and the seductive rhythms of son “that demonically possesses the body from the waist down," Miami New Times.  Listen to their music.

Made possible with a grant from the National Endowment for the Arts.

Spring in Michigan, and a person’s fancy turns to thoughts of love – of chocolate! The Traverse City Chocolate Festival 2013 will fill your senses with the aroma, visions and tastes of all the chocolate that the historic City Opera House can hold!

This year’s Festival highlights include: chocolate sculpting demonstration by Chef M.R. West; chocolate sculpting mini-workshop; music by TC’s own Jim Hawley, singer and songwriter, and door prizes. Chocolate tastes and samples will be provided by the region’s finest chocolatiers, chefs and caterers. As fund-raiser for the Northwest Food Coalition, there will be an on-site food drive and a raffle to benefit the 6-county food kitchens served by this agency. Traverse City Chocolate Festival is the premier chocolate event of northwest Michigan.

Be mesmerized and captivated by this sweeping saga.  Soaring music and historical drama set the stage for this larger than life tale of love, valor and honor.  Be part of the experience of Les Miserables this fall on the Old Town Playhouse stage.

Subscribe to Traverse, Northern Michigan’s Magazine and stay in touch with the arts Up North.
X
X