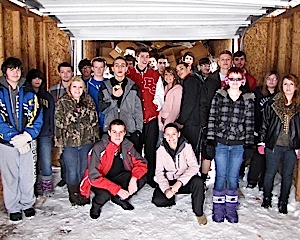 Note: Benzie Community Water Council has rescheduled the Festival to Friday, April 26, at the same location. Stay tuned to water-festival.org as well as at the Benzie County Water Festival Facebook page) as we work with our special guests to reschedule; changes to scheduled presenters may occur.

Northern Michigan Events: The Benzie County Water Festival is a unique event designed to engage the public in the stewardship of the Great Lakes, the response to the global freshwater crisis, and the cultivation of a vibrant and sustainable local culture. This year's theme is: “Under The Surface.”

The Benzie County Water Festival seeks to attract, entertain, educate, and activate individuals and groups within the community. This is a family-oriented, community-centered event that has fostered education, engagement, and networking in a rare and valuable way.

The first Benzie County Water Festival in March 2011 was very successful, with more than 300 attendees during a weekend of events that featured world-class Michigan musicians, speakers, and workshops. Though the second festival in April 2012 was a only a one-day event, attendance exceeded that of the previous year thanks to great programming that featured three panels of local experts who addressed the state of Benzie County’s watersheds, as well as the economic impact of entrepreneurial businesses in our region.

Through fundraising efforts, the Benzie County Water Festival is free and open to the public, however donations are encouraged and will help to fund future events.

Thanks to a grant from the Grand Traverse Stewardship Initiative, the 2013 Festival will begin with a Water Science Fair at Benzie Central High School. During the afternoon, students will present their projects to other students. Once the school day is finished, local organizations will set up displays alongside the student projects and the Water Science Fair will then be open to the public. At 3:30pm, The Dread, a band made up of BCHS students, will take the stage. Kids’ activities will be ongoing from 4:30 until 6:30 and will include a do-it-yourself water harp, a hydrogen fuel cell car, a watercolor mural, a video station, a stream table, and a live amphibian display, which was probably the most popular part of last year’s festival, with kids and adults alike taking turns holding all kinds of Michigan frogs, snakes, and salamanders.

At 5:30pm, Tom Kramer will once again lead this year’s panel discussions, beginning with Kurt Luedtke of Luedtke Engineering who will address the recently passed legislation to dredge Betsie Bay. At 6:00pm, the panel discussion switches to water used for fracking with activist Peggy Case, president of Michigan Citizens for Water Conservation, and journalist Keith Schneider of Circle of Blue. Stick around for a pizza dinner, available for purchase from the after-school SEEDS program.

Combining this year’s theme and push for youth engagement, the keynote speaker, who will take the stage at 7:00pm, is Hans VanSumeren, one of the most highly regarded underwater vehicle pilots in the nation and director of NMC’s Water Studies Institute, the first program in the United States to award an Associate’s degree in freshwater studies. Americana bluegrass by Fauxgrass will close the evening, taking the stage at 8:00pm.