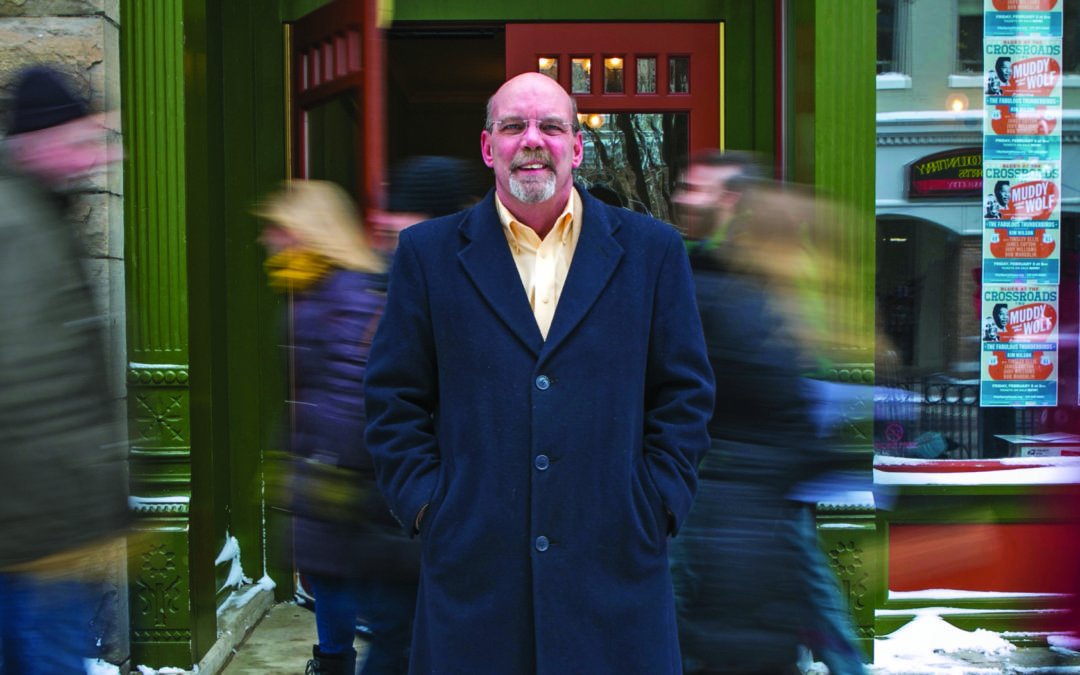 Bryan Crough, the longtime executive director of Traverse City’s Downtown Development Authority, died June 16, 2013. For more than three decades, Crough worked brilliantly and relentlessly to shape Traverse City into the vibrant, colorful city it is today. In April, Traverse Magazine’s Jeff Smith sat down with Bryan to learn the science behind the Miracle on Front Street. From the staff of MyNorth Media: Bryan, we will miss your spirit and your energy, but know that you live on in the Traverse City of today and tomorrow.

This article was originally published in the April 2013 issue of Traverse, Northern Michigan’s Magazine.

Traverse City History: River’s Edge rises along the Boardman River. The Milliken Building transforms into a smart and handsome echo of its original self. The State Theatre re-opens as a spectacular renovation, as does its next-door neighbor, now home to Red Ginger. Radio Center emerges at Park and Front. Midtown sprouts upriver from River’s Edge. The Bank of Northern Michigan building amps up Union Street. 101 North Park takes the place of a big hole. Two surprisingly nice-looking parking decks are born.

The buzz of downtown construction, renovation and vitality that Traverse City saw kick in around the turn of the new millennium would be remarkable during any dozen-year span, but when set against Michigan’s worst-in-the-nation economy, that growth seems nearly miraculous.

Sure, everybody in America is painfully aware of the Great Recession, but what few outside of Michigan know is that our state’s employment peaked in June 2000 and then entered a decade of decline. Some economists even labeled our economy the “one-state recession.” From April 2000 to December 2009, the United States lost 1 percent of its nonfarm employment, while Michigan lost 18.4 percent, and during that time lost nearly 1 million jobs, according to a University of Michigan study. The state’s economic story is difficult to look at even in the rearview mirror, but those disturbing numbers put Traverse City’s vitality into especially sharp and bright relief.

So, how did that growth happen? For backstory, on a chill January afternoon we invited Bryan Crough, Executive Director of Traverse City’s Downtown Development Authority, to don his signature overcoat and walk around downtown to talk about the transition.

So, when you think about this decade-plus of growth in Traverse City’s downtown, what is the first thing that comes to mind as a driver?

You really can’t talk about that without going back much further, to the late 1980s. People were very concerned. A big mall was coming, Penny’s was leaving downtown, the Park Place was bankrupt. So we had a summit about the future of downtown and hundreds of people participated over two days.

Give us an important change that came from that.

People decided that the Downtown Development Authority and the Downtown Traverse City Association—the merchant association—had to have clearly separate responsibilities and clearer missions. And they hired me to head both organizations—I had been on the city commission.

Can you recall an early task that might sound simple but was important in putting things in motion?

We had to get people to have a cohesive vision for downtown, and one of the first things was convincing merchants to stay open for the same extended hours during holiday shopping. It signaled a renewed spirit of working together.

But also, some other basic principles came out of those early meetings. We estimate that we had lost a third of downtown buildings from the 1961 peak. Buildings had been torn down. Fires had destroyed some. And more and more surface parking lots had been put in. We wanted to reestablish density and connectivity. We were talking about placemaking before we even knew there was a term for it, and it explains why Traverse City sent the largest contingent to the first Congress on New Urbanism.

A third of downtown gone and all the momentum heading in the wrong direction.

When I talk to other towns about this, I tell them downtowns decline one step at a time. And in coming back, downtowns discover that the opposite is also true. It’s not about one big magic new development. It’s a whole bunch of little things. You have to worry about everything. Everything. You can’t worry about the multimillion developer without also worrying about individual stores and whether there are dead bugs in the merchants’ windows.

What about the people part of it, getting people back into downtown?

We recognized that we needed some outside help, and we brought in some consultants in the 1990s. One of the things I’ll never forget is one of them said, “You need downtown to be the hometown place to shop.” And out of that came Friday Night Live. We wanted to show off Front Street. We put flyers in surrounding neighborhoods. We targeted locals, and the whole goal was “the hometown place to shop.”

Can we concede there was also a measure of luck, as in, our Rotary Club happens to have lucked into owning a very profitable oil well and has been generous with downtown.

Yes, we did have the good fortune of a major breakthrough when Rotary decided to buy the Park Place Hotel, renovate it and operate it at a loss. That was huge. And Vic and Amy Herman would have never considered the great risk of buying the empty Penny’s building if Rotary hadn’t done that. On the day the Hermans moved their bookstore, we closed off Front Street on a Sunday and over one hundred people volunteered to move the books. They each got a mug that said, “I helped move Horizon Books.”

But, yes, people say to me all the time, “Oh, Traverse City is lucky, things just drop into your lap.” Like the Film Festival. Like Hagerty Insurance. But would Michael Moore have considered the film festival in Traverse City if the State Theatre group hadn’t kept the building in a condition that allowed it to be saved? And if the Old Town Playhouse and Open Space didn’t exist as venues? He was drawn, as many others have been, by what was going on already. And there were many solid pieces here, ready to happen. So I think a plan is more important than luck.

So I’m thinking of a saying, “luck is when preparation meets opportunity.” What kind of preparation set the stage for things to take off about 2000?

Back in about 1996 we saw the need to really take retail to heart even more, and we went to another retreat. We blew up sections of downtown, maps covered in clear plastic, and we divided ourselves into groups to brainstorm what each part of downtown should look like. And when people reported out, everything just fit together. There really weren’t any issues. People wanted more density, connectivity and less surface parking lots. From that came the Tax Increment Financing that was adopted in 1997—it allows you to do infrastructure improvements when the tax base is created.

The first thing on the to-do list was getting rid of that awful appearance when you walked out of the Park Place and looked to Front Street. There was no connectivity: a single story building, a surface parking lot in disrepair, an abandoned gas station on the corner of Front Street. So we approached Ross Biederman with a plan where he would build a building to anchor the corner of Front and Park, and we could use the increased tax base from that building to borrow money for the parking deck. And so we now have Radio Center 1. And that was the beginning of getting rid of the surface parking lots.

So that’s the fundamental strategy here? Keep chipping away at the surface parking lots and replacing them with smart mixed-use development and parking decks?

What else do we see at Radio Center that expresses the vision?

We wanted retail on the ground floor, not office. Also, we had passed an ordinance that said you could not have dark windows on the ground floor. They had to be clear and inviting. So you see you have the EuroStop and Allure and Running Fit with those nice big windows.

And meanwhile River’s Edge was going up.

Yes, meanwhile, River’s Edge came along. That development was 1999 and was so important because it allowed us to turn away a proposal from a drug store chain for a one-story building and a surface lot. We are so fortunate that Tim Burden captured that vision. The density we have there now and the tax base is so much greater than what could have been achieved with a drug store.

It seems River’s Edge was truly the first development to really play out that full vision of mixed use, in terms of office, retail and living.

It showed people we were willing to live downtown, and that has been a great thing. In the early days of the DDA, we were required to have a resident on the board, but it often remained vacant because so few people lived within the district. But recently we had as many as three residents on the board, and currently the chair is a resident. Now we have hundreds of residents in the DDA district, and they tend to be very active. I think I can name almost everybody living in Midtown development because they are so involved.

Speaking as an observer of downtown, it seems to me a big turning point came when Gene LaFave renovated the Milliken Building about 2000.

Yes. Gene deserves a great deal of credit for that. That was huge, a mix of offices, retail and apartments in the heart of downtown. One funny story there, he hired architect Bob Cornwell to pull off that 1960s facade and redo the building, and he did a beautiful job. And it turns out that Bob’s father, Gordon Cornwell, was the architect who put that facade on! Hilarious.

So with people moving back downtown, that shows there are some broader cultural trends working in Traverse City’s favor too.

Two really strong demographic trends. One: Millennials don’t want a car. They are drawn to Traverse because they see a compact city that has a walking, biking future. And the other is the lively retiree who wants to walk downtown, walk to see a movie, enjoy the river right in town. And we are a community of choice. Astronaut Jerry Linenger picked this spot from outer space. It’s an inspiring place that fits with the rise of the creative class. When you make a wonderful place where people want to live, the companies will follow. When we did our last retail market analysis, we saw growth in the younger sector, and our consultant, who is from Chicago, said, “This is the kind of demographic we see in Chicago.”

We’d have an entirely different story to tell if all the buildings were ugly or just plain drab. How did that piece of the miracle happen? How did we end up with not just more buildings, but really nice buildings that take the city forward?

Well, we do have ordinances that set certain standards, but even more important, because we are a community of choice, we have amazing architects who choose to live in this community, and our developers have turned to them. They are young. They get it. They understand what the community wants to be, and they want to preserve that. They live here and have to walk past these places and want to make them right. Even our parking decks look nice. People call the new Old Town deck that Ray Kendra designed “the sexy deck”—a handsome, LEED Certified parking deck with solar panels, how cool is that?

A final thought for visionaries in other towns?

I guess I’d say that if you have a plan, it’s just so much easier to make things happen. And I tell people, if you are looking for one easy answer, it’s probably a bad one.