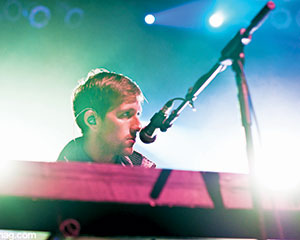 While America was dialed into their televisions to watch the Grammy Awards ceremony back in February, citizens of the tiny Lake Michigan burg of Frankfort headed downtown to the Garden Theatre to watch a live HD feed on the big screen. Luring them from their homes on a frosty February night was hometown boy Andrew Dost, part of the trio that makes up the pop group Fun, who was nominated for two of the Grammy’s premier categories: Song of the Year, for We Are Young, and Best New Artist—both of which the band won.

Dost’s dad, Mark Dost, a retired Frankfort teacher, in thinking back to the classic small-town community evening, says, “Everybody was just staring at the screen, and we were all just on the edge of our seats. They showed the five nominees for Song of the Year, and she said ‘We …” and paused for just a moment. And I tried to think if there were any other nominations with the word We. And then she said, ‘We Are Young.’” No surprise, everybody SCREAMED! Mark brought his camera, but forgot to take any pictures.

Mark thinks the song is so popular because it speaks to everybody from teens to seniors. “My uncle is 86 and he stays in shape, does a lot of things, and he said the song really means something to him because it’s about being young at heart.”