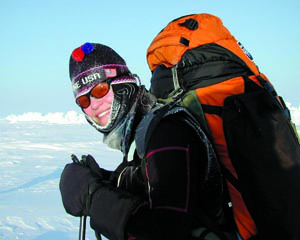 As Kerri Finlayson begins a Sunday morning run, she snaps her blond ponytail through her hat and adjusts its fit on her head with a deft, deliberate shove. She pulls on her gloves, stretching her fingers wide, jiggling the cuffs until the seams settle to her liking. Finlayson and I are about to run together along the Little Traverse Wheelway from Petoskey toward Charlevoix. It’s cold, the wind chill 10 degrees below freezing. The bushes wear tufts of snow, and the bay looks as though it’s made of steel, each wave clanging toward shore. Our breath dances out in front of us. I watch Kerri square her shoulders, and with a quick burst we’re in motion, the pavement like a coiled ribbon unrolling beneath our feet.

This is how Kerri begins everything she does. Sudden motion and sheer energy. They propelled her to ski to the North Pole, climb Mount Kilimanjaro, and bike the east coast of Africa. They sustained her when she ran a marathon and as she competes in triathlons. That same vitality is what inspires her anthropology and sociology students at North Central Michigan College in Petoskey to care about things like income inequality.

Finlayson’s first big adventure was tackling the North Pole. “I was just sitting in my office,” she says. “I was feeling lost and insecure after grad school, and I idly logged onto Yahoo.” Through a bit of searching on adventure, she stumbled on an advertisement for the trip, a trek through snow and ice cliffs to the North Pole with a group of women. The promise of adventure stood in exciting and stark contrast to her moment: settled in her chaotic office, heaps of student essays at each elbow with more on the chair beside her, the computer screen reflecting brightly in her eyes.

Finalyson’s office entryway at North Central is a tribute to her quest to grab hold of life. On the door she’s plastered bumper stickers that proclaim “My other car is a bicycle,” “Hakuna Matata,” “I love winter,” “I have visited Ngorongoro Crater, Tanzania,” and “Whatever you are, be a good one.”

“My imagination went wild,” she said, “and I thought I could die. I’ve gotta do it.”

And so, behind the slogan-cluttered door on that day she first considered the North Pole, she read the description of the trip. “My imagination went wild,” she said, “and I thought I could die. I’ve gotta do it.”

A similar arc—from knowing nothing to launching a journey in a distant land—led Finlayson to ride her bike through nine countries down the east coast of Africa, from Cairo to Cape Town. She stumbled across the trip online, and thought “I’ve never desired to see a huge swath of Africa. Let’s do it!” By the time Finlayson began the trip, she’d morphed the journey into a sociological study of group dynamics, which she plans to publish, so, so that the biking would dovetail with her own academic questions.

The group rode an average of 77 miles a day, and sometimes as many as 120. The physical push of the adventure is not, however, what she accentuates as she describes the trip. “It was so interesting to watch the people,” she says. “One couple was just about torn apart. The old men bonded but never rode together. It was fascinating.” Today’s run takes us past the intersection with Blackbird Road, which to me looks like an asphalt ramp that heads straight for the sky. I can barely see its crest. “Blackbird,” says Kerri. “Sometimes I run up that hill just to see if I can.” I’m grateful we run on past, sticking to the flats.

When Finalyson’s group headed to final training in Siberia for the trek to the North Pole, the initial plan was to ski across two parallels of latitude (latitude lines run about 69 miles apart). But it became clear that some members were unprepared to ski that far through the cold. During a somber meeting in their tent at ice station Borneo, when the group faced the reality that they needed to map a shorter route, Finlayson remembers saying “We can do one parallel. I wanted to do two, but we can do one as long as it’s tough.”

Just south of the pole, the group leader told the skiers that if they wanted to make it, they would need to ski for 48 hours straight. In the last three hours of that stretch, someone fell into open water. Another member became incontinent and a little deranged. But then they came across ski tracks, those belonging to a group that had skied in ahead of them. Following the twin parallel lines, they all made it safely to the pole.

Another person might remember the toothy wind, the aching cold, the despair that settled over the group at the end. But Finlayson’s central memory of the North Pole trek is the day after they arrived, when they climbed a pressure ridge to see the swelling blue-white landscape stretched before them. They saw a lone explorer on the other side of the ridge, a man on a solo trip from Russia through the North Pole to Canada. “It was a very ethereal experience,” she says, and it’s clear from the faraway, dreamy tone of her voice that she is remembering the ice and snow, the way it had framed someone else stretching the limits of adventure even further. There is always a bigger challenge over the next pressure ridge, and Finlayson is keenly aware of that.

“I was always like, you guys, let’s get outside!”

When she was a little girl, Finlayson remembers exploring a culvert near her house, hoping to stumble on historical artifacts. She laughs as she remembers cajoling her friends to join her. “I was always like, you guys, let’s get outside! My friends remember me mobilizing them with pails and shovels and going into the culvert. It was dark and scary but we were intrepid explorers.” The discovery of the hollow carcass of an old car and a few chipped ceramic pieces (historical significance unknown) solidified Finlayson’s future: she knew from that moment that she wanted to dig up the past and learn about the world’s people.

At 19 she did her first field school in Belize, where she worked on a Mayan archaeological dig at the Bedran mountain group site. The team uncovered architecture and scores of pottery items. As the memory of excavation washes over her, her cheeks stretch into an uncontrollable grin. “Every day,” she says. “Every day we found something. It was the time of my life.” We’ve settled well into our run by the time she remembers Bedran. Our feet keep tempo with her fast excited chatter. My fingers are bone cold, but I can see that Finlayson is just happy to be outside and reliving adventures past.

While working on her master’s degree, Finlayson traveled to a dig in Nicaragua. “Nobody knew anything about Nicaragua at that time,” she explains. “That’s how I knew I wanted to go there.” There she found a strange, mystical vessel with hands reaching out from the front and eyes near the top. She remembers the deep quietude and wonder that swept over her as the team worked to open the vessel. “You were definitely trepidacious,” she explains. “You can’t help but feeling a little spiritual, and you say a little offering like, Thank you for letting me excavate this.”

Finding limits and then disregarding them keeps Finlayson in a constant quest for the next challenge. Her first triathlon, last year in Grand Rapids, left her sputtering and choking as the race kicked off with the swim portion. She explains,  “I started out super excited, but then I couldn’t breathe, and I had to do the doggie paddle for awhile to calm myself down. My goal was just to do 10 freestyle strokes in a row, because there are people kicking, splashing, and someone could kick you in the mouth or grab your hair.”

“I still can’t believe I did that. It was very tough.”

She remembers the Detroit marathon as the hardest race she’s ever done. At the 20-mile mark she thought, Really? How are we going to do this? By the time she’d managed to force herself to 24 miles, she realized the race was a “total mind game.” She shakes her head in residual disbelief and says “I still can’t believe I did that. It was very tough.”

When Finlayson trains for races, it’s almost always outdoors. “Up here in the North,” she says, “you are always within 25 minutes of a great spot to ski or bike or run; the North Country Trail is everywhere. Running past trees and rolling hills, you feel you’re in the middle of nowhere; you can escape and become a part of the wilderness. When you’re outdoors here, you feel like you’re living.”

In August she plans to do a half Iron Man race in Benton Harbor. The challenge includes a 1.2 mile swim, 56 mile bike ride, and 13.1 mile run. She might take friends up on an offer to hike across Iceland. It’s not a crazed will or lack of satisfaction that makes her look for the next thing, however. All the pieces of her life center around people—their ancient roots, the way they meld together in groups, teaching and fostering curiosity in the next generation.

“I’ve always had a fascination with people,” she says, “and I think of the word ‘strong’ in all these different contexts when I try to challenge myself. One reason I did all these races is because I felt it would make me feel strong if I completed them. It’s always a test: can I do it?” It takes strength to run, to teach, to bike across a continent. So when Finlayson takes a winter morning run on the bike path beside Lake Michigan she’s calling on strength, her own and that of all the people she’s studied, as she takes her next step forward. The wind is howling, shuffling our words, and I feel my lungs fight against the prickly cold air. In an hour I’ve crossed six miles of pavement and half the world as I listened to Kerri’s adventures. My heart is pounding and she’s got me thinking that maybe it’s time I sign up for a race.

This feature and additional travel photos are available in the March 2013 issue of Traverse, Northern Michigan’s Magazine. Get your copy today!