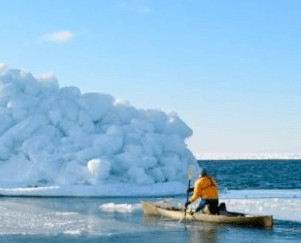 Nothern Michigan Outdoors: What do you get when you combine an outdoor goods store owner, Lake Michigan and a frigid winter? An epic adventure. That's what happened when Josh Baker, owner of The Outfitter located in Harbor Springs discovered a giant ice mass about 100 yards off the icy shore of Lake Michigan. After viewing his incredible photos, we had to learn more about his Northern Michigan adventure to the Great Lakes iceberg in Good Hart.

First of all, how did you discover this ice mass?

Well my wife and kids were up at her parents cottage just messing around on the frozen lake and we just looked out and saw it. We thought it was super cool and we decided over dinner that we were going to go out and climb it.

What kind of gear did you use?

I had a kayak, which I dragged all the way across the snow and ice, basic ice climbing tools and a screw from the anchor of my kayak. And I wore a dry suit so in case I fell in the water I would be warm. It looked to only be about six to eight feet deep, but I wouldn't take the chance without a dry suit.

How did you actually get out of your kayak on to the ice mass?

I kayaked out there and then just kind of maneuvered myself up on my knees and got out. It seems difficult but it just kind of worked. Then I used the screw to anchor my kayak and I just climbed up. It was about fifteen feet high and probably sixty feet long, I mean it is huge. I have never seen an ice mass like that before, but they are actually more common than you think. It's like those ice balls that have been popping up on shore, they are very common but you just don't actually see them very often.

I mean, I had a dry suit on and like I said, the water only appeared to be six or eight feet deep. Once I was on top of it though, I was kinda like "woah, this thing is moving," because it felt like the whole thing was moving, but it wasn't, it was just the water around it. It was weird though and kinda freaky. But it is definitely anchored down to rocks underneath it, it wasn't moving anywhere.

What was the best part of this whole adventure?

It was just such a blast having the kids out there. It's such a crazy environment in the winter and having my kids out there with me was great. It was so much fun throwing them in the kayak and dragging them out there. Plus it was really fun to climb, and it wasn't technical at all. It's just absolutely beautiful out there right now, it's been a great winter.

The pictures are great! How did you manage that?

Well my wife Molly took pictures from the shore, so those are all of the further away ones of me climbing. I actually had a GoPro camera strapped to my chest, which I originally thought I had set to videotape, but it was on a timelapse setting. I didn't even realize it never videotaped until I plugged my camera into the computer, but I think it turned out better than a video would have. It's just really cool because the pictures were totally taken by random.

I agree, they look awesome. Any tips for others who want to visit the ice mass?

Well first of all, make sure the ice is solid. It's really sarting to get warm, so make sure it's safe. People need to remember that the water is 32 degrees and I wouldn't go out there without a dry suit. It's about 100 yards out, but you can go to Redman Township Beach and walk along the shoreline and see it. It is an absolutely gorgeous winter, I mean Sturgeon Bay is incredible right now. I just really recommend that people go out in general, it's just such a beautiful winter. But the ice mass is really cool to actually see.

View the full gallery of photos at The Outfitter of Harbor Springs facebook page!