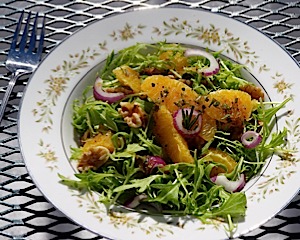 Northern Michigan Food: Every week, we receive an email with Kristin's upcoming Intentional Minimalist featured recipes. And every week, we sit wide-eyed at our computers. The subject lines alone will make you question if you've already eaten lunch. And the photos, well, having a snack on hand is a wise decision. So are you ready for this one? Maple Whiskey Orange Marmalade. The chef herself precautions all at home that "the marmalade will sweep you off of your feet and knock your socks off….that is if you can keep out of it during the last hour it is cooking." Is that a dare, Kristin? Sounds tempting. And delicious… Okay we're in.

Turn off crock pot. Stir marmalade and jar in glass jars with tight fighting lids. Store in refrigerator and use within one week or freeze.