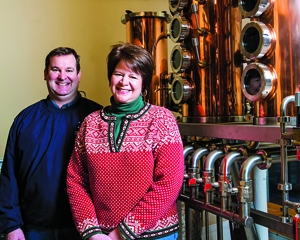 Former schoolteacher Mark Moseler took a spirit-making seminar at Michigan State four years ago and decided to get into the hooch game, launching Northern Latitudes Distillery last July. With a brand new tasting room and distillery in Lake Leelanau, Mark is crafting small-batch spirits on a custom German combination still. We catch up with Mark to talk whiskey aspirations and the truth behind moonshine.

I’ve been working on recipes at Michigan State for the last four years. Initially we’ll be producing a bourbon, straight rye and wheat whiskey. I plan to bottle both small and large barrel-aged versions of each.

Wheat whiskies are smoother and slightly sweeter than ryes.

While we’re waiting for those whiskeys to age, tell me about the Dog Man.

Dog Man is our proprietary moonshine, which is to say it’s whiskey that goes straight from the still to the bottle without ever seeing a barrel.

This feature is also available in the February 2013 issue of Traverse, Northern Michigan’s Magazine. Get your copy today!
X
X