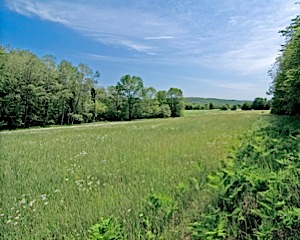 A new preserve with a long history of farming and conservation has now been established in the Lake Charlevoix watershed, thanks to a conservation-minded seller and generous foundations.

In 1968, Arthur and Pauline Keeler purchased more than 200 acres for their family to have a recreational property in Northern Michigan that offered the feeling of getting away from it all, yet was close to skiing, restaurants, and other vacation attractions. In the early ‘90s, the Keelers’ grandson Jeff Knaggs and his wife Ruth Hufnagle purchased the land, keeping it in the family. From the 1970s until last year, the family worked with local agencies to enroll the land into a variety of conservation programs. Trees were planted for wind breaks, erosion control, wildlife food, and aesthetics. Over time, the trees were managed within a Forest Stewardship Program, including most recently for Emerald Ash Borer.?

“What wove all of these efforts together were the fun times family and friends enjoyed on the property,” Jeff said. When it came time to consider selling the land, Jeff contacted the Conservancy to explore what options might exist. “Over the past four years, Jeff really stuck with us to find the right solution so that the land could ultimately remain in the natural state that his family and the farming families before them had treasured,” said Land Protection Specialist Ty Ratliff. ?

The purchase of the preserve was made possible with funding from the Taylor Foundation, the J.A. Woollam Foundation, and support from the greater Darnton family. The preserve is named in honor of the Darnton family, longtime summer residents of the Lake Charlevoix area who have similarly enjoyed the beauty and escape that Northern Michigan has offered their family for generations.?

“My family first came to Lake Charlevoix back in the mid-20s,” said Paul Darnton who was born in 1921. “My father had two weeks vacation and we used to leave Flint at 4:30 in the morning. You were on a gravel road and when you got north of Gaylord, you were on a two-track road.”?

Over the years, Paul recalls exploring much of the northern lower peninsula. “I’m a bird hunter and a trout fisherman and I’ve hunted and fished almost the whole part of the lower peninsula north of Gaylord, though I can’t anymore.”

Paul had four married brothers (Robert and Francis; Richard and Laura; Thomas and Sue; and William and Mildred) and today, several of the Darnton family members still vacation in Northern Michigan. A few live in the area full time. To celebrate his and his wife Jeane’s 60th wedding anniversary, they rented a home on Lake Charlevoix where everyone could come and stay. “We just had a most wonderful time,” Paul said.?

In so many ways, the Darnton family represents how the wild beauty of Northern Michigan is a treasure to be protected.

For more information about this and other Conservancy nature preserves, visit landtrust.org or download the free nature preserve app available on Google Play or the Apple App Store!

Get more on Northern Michigan Outdoors in our free monthly newsletter!