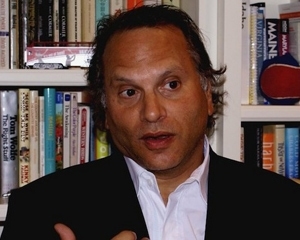 Traverse City Events: Rarely does an author transcend his chosen genre. Buzz Bissinger managed to do it first with his breakout bestseller turned popular television series, Friday Night Lights. Not just a sportswriter, Bissinger is a master storyteller known for his artful ability to capture the everyday dramas faced by coaches and players off the court and away from the cheers of adoring fans. His ability to weave a compelling narrative and reveal the human side of every story is why some Bissinger’s most ardent fans are, in fact, readers who have little interest in watching sports.

Now with his latest book, one of this nation’s most-honored and distinguished writers ventures into entirely new and intensely emotional terrain. Father’s Day: A Journey into the Mind and Heart of My Extraordinary Son, chronicles the lives of Bissinger’s twin sons, born 13 weeks premature in 1983 and weighing less than two pounds. Gerry and Zach are twins who grew to live diametrically opposed lives. After obtaining his Master’s in education from the University of Pennsylvania, Gerry is now a public school teacher while Zach, because of oxygen deprivation at birth, suffered trace brain damage and struggles every day with enormous learning disabilities.

Zach, now a savant, is challenged by serious intellectual deficits but also blessed with rare talents: an astonishing memory, a dazzling knack for navigation, and a reflexive honesty that make him both socially awkward and surprisingly wise. In Father’s Day, Bissinger chronicles a summer road trip he takes with his son in an effort to connect with the inner workings of the boy’s mind and heart.

On March 5, Buzz Bissinger will appear on the Northern Michigan stage of the City Opera House to discuss his latest book, his life and some of the interesting back stories behind his award-winning career. The author of five highly acclaimed nonfiction books — Friday Night Lights, A Prayer for the City, Three Nights in August, Shooting Stars and Father’s Day — Bissinger first won praise as a journalist working for The Philadelphia Inquirer where he received the Pulitzer Prize for Investigative Reporting for story on corruption in the Philadelphia court system in 1987.

In addition to the Pulitzer Prize, Bissinger has also received the Livingston Award, the American Bar Association Silver Gavel Award and the National Headliners Award, among others. “Shattered Glass,” a 1998 Vanity Fair article about the bizarre career of New Republic writer Stephen Glass, was later made into a film of the same name. Another 2007 article for Vanity Fair entitled, “Gone with the Wind,” about the saga of 2006 Kentucky Derby winner, Barbaro, has also been optioned by Universal Pictures.

The City Opera House is located at 106 E. Front St., Traverse City. Get tickets and more information at nationalwritersseries.org.