Amazing Fat Tire Biking on Ice that is Crystal Clear 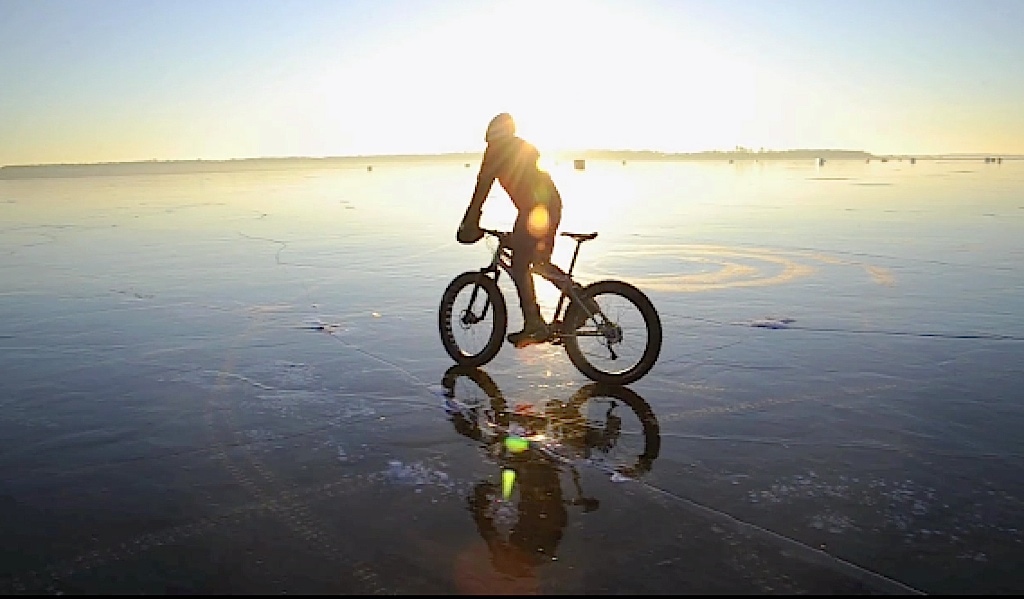 A still-photograph that Upper Peninsula photographer Aaron Peterson shot of his friend Ryan LaBar fat tire biking on ice that is completely transparent went viral some weeks back, garnering millions of views from around the planet and, for a time, hanging out as the No. 1 most-viewed photo on Reddit.

This week, Peterson released a short video he also shot that day (see above), in part because he felt nobody would believe the photograph (what with so much Photoshop happening nowadays) unless they also saw the video. We asked Peterson to share a little backstory on the day.

So then. Idea generation please …

I have to give big props to Ryan LaBar, because he really made it happen. He lives in Marquette, raced mountain bikes in college, is just a bike geek. Anyway, via social media, maybe Facebook or something, he saw a photo of somebody ice skating on this crystal clear ice and he gave me a shout, said there’s some really interesting conditions in Gladstone. Let’s check it out.

There’s obviously some special tires going on there. Tell us about them.

Ryan has been doing testing of fat tire bikes for Bike magazine, and he’s been getting all these accessories and one accessory was a set of studded tires from 45 Nrth, based in Minneapolis.

And you lucked out with the weather.

Right. We did a dawn patrol, drove to Gladstone, on Little Bay de Noc, and got there just before the sun rose. It was spectacular. The sky was perfectly clear, and the ice was just a mirror image of the sky and the ice was just painfully clear. There was about seven inches of ice.

Safe, but not everywhere, apparently, thinking of that snowmobile you videoed that was embedded in the ice.

Tell us about roaming around on transparent ice.

Neither Ryan nor I expected it to be that cool, the entire bay to be that clear. Near the shore, you could see the ripples of the sand right below, but then you go out further, and the bottom drops away from you into darkness and weeds, and you get this vertigo feeling that is really trippy.

So the video is about riding on crazy clear ice, but you wove in elements of Yooper culture, like the snowmobile in the ice and the ice fisherman walking by. Why was that so important to include?

The U.P. has its Yooper culture, and winter is undeniably a strong factor in influencing that culture. We don’t stay inside in winter. You have to get out or you will go crazy, so people go ski jumping, snowmobiling, ice fishing, skiing, that is all just normal, and now riding your bike in winter is part of that. Marquette is grooming a single track for snow riding, they built their own groomer. Last week was best week of riding all winter. The trail was super fast and flowy and fun.

Fat bikes are a marriage of bike culture and Yooper culture, and it’s been really fun defining the look of a new sport. There are a lot of ripped dudes racing fat tire bikes on wide groomed trails, but there’s a lot more to it than that. I wanted this video to show the fun. That’s what fat tire riding in snow is, fun, just incredibly fun.