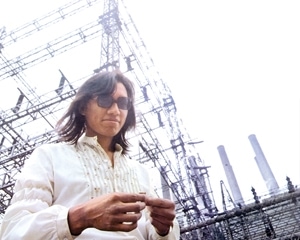 Traverse City Events: The Traverse City Wine & Art Festival, an annual celebration of wine, culture & cuisine, is excited to announce the June 22, 2013 headliner, Sixto Diaz Rodriguez. Rodriguez is the Detroit-born singer-songwriter whose story is told in the Oscar-nominated film Searching for Sugar Man. This powerful tale of an overlooked superstar has amazed audiences at Sundance, Tribeca, Traverse City and other film festivals across the nation and world.

With the film's Academy Award nomination for Best Documentary, Rodriguez is fast becoming a global phenomenon. Building on appearances in 2012 on David Letterman and 60 Minutes, he has recently appeared on the Tonight Show, in this week's issue of TIME Magazine. Rodriguez fever is sweeping the globe, with upcoming appearances at huge music festivals including Coachella and Glastonbury and legendary venues like the Royal Albert Hall and Carnegie Hall.

“When Rodriguez came to Traverse City this summer for the Traverse City Film Festival, there weren’t a whole lot of people talking about him,” explains Festival Director Laura Herd. “ We knew right away that Rodriguez was the perfect musician to anchor the 100% Michigan lineup we wanted to have for our 5th annual festival, and we’ve been so happy to watch the world discover him.”

Leelanau Wine Trail President Matt Gregory agrees, “It’s the mission of the Traverse City Wine & Art Festival to bring rare and wonderful performances. Offering our fans the chance to see a budding superstar like Rodriguez on the big stage in a beautiful outdoor setting here in Northern Michigan is exactly why we created the festival.”

Rodriguez is joined by The Crane Wives, an indie-folk band from Grand Rapids, the Ben Daniels Band of Chelsea, and Blake Elliott and the Robinson Affair from Traverse City.

More than simply a music festival, the Traverse City Wine & Art Festival is a feast for every sense, gathering 30 wineries from Michigan’s Wine Coast, 30 artists with original work for show and sale, a dozen fine restaurants and a dazzling display of decor and performance art.

Tickets, packages and information about the entire weekend’s activities including the new Friday night Winemakers Party are available at traversecitywinefestival.com.