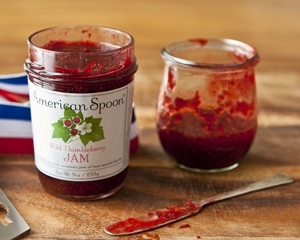 Northern Michigan Food: American Spoon, the artisanal fruit-preserving company founded in 1982, has been named a winner for the 2013 Good Food Awards. For the second year in a row, judges selected the Petoskey, Michigan-based company’s Wild Thimbleberry Jam for this prestigious award honoring craftsmanship and sustainability.

Noah Marshall-Rashid, Vice President of American Spoon and son of co-founder Justin Rashid, accepted the award on January 18, 2013 at a ceremony in San Francisco. He was selected by Good Food Awards Director Sarah Weiner to speak on behalf of all winners in the preserves category. “I want to thank the founders and sponsors of the Good Food Awards for providing this annual reminder to the American marketplace that integrity and authenticity and passion do matter. That taking a keen interest in knowing the people who produce our foods, the places where they are grown, the ingredients and methods that are used to make them is intrinsic to eating and living responsibly and well. And that the most humble endeavors—including making a simple jar of jam— can contain great ambition,” Marshall- Rashid said.

The thimbleberry is a tart, aromatic fruit that grows wild in northern climates, thriving in areas with cool summer temperatures and rocky soil. The berries grow on wild, thornless shrubs with large maple-like leaves and are found across Michigan’s western Upper Peninsula. They have a tangy taste reminiscent of currants and rasberries and their soft seeds release a unique nutty flavor when chewed.

For over thirty years, American Spoon has worked to build direct and personal relationships with Michigan’s independent fruit growers and foragers. American Spoon contracts with local residents of Michigan’s Keweenaw in the Upper Peninsula to pick precious wild thimbleberries for its Wild Thimbleberry Jam. Fruits are prepared by hand and preserved in American Spoon’s copper kettles using twice as much fruit as sugar.