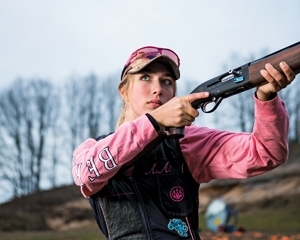 Thirteen-year-old Traverse City middle-schooler Annabelle Ayres rocked the world of shotgun sports last fall when she won Lady’s First Place in the National Sporting Clays Championship in San Antonio. (She is fully five years younger than the previous youngest national lady’s champion.) In August Annabelle moved to Traverse City from Louisiana and practices at Cedar Rod & Gun Club. We met with Annabelle at a downtown coffeehouse, expecting a camo-geared tomboy. Reality: The fresh-faced blonde was indeed decked in athletic gear, hot pink, that is. She shared stories from the championship, and showed a handful of photos of her and her dog—revealing her ultimate dream, to be a veterinarian.

What sparked your interest in shooting?

[Laughs] I didn’t choose shooting. I actually chose fishing at first. Dad told me there was a pond out by the shooting place he was going, and I went along. I was at that pond for about three months, not thinking anything of it. Then one day he just asked, “So you want to try shooting?” He got me a 28 gauge, and I started shooting that day. Mom says I was 8 at the time but I’m pretty sure I was 7.

Tell us about San Antonio—did you expect to go home with first place?

I remember hoping I was going to do well when we were driving down the road and I saw all these banners with the sponsors. It was just really cool. I remember thinking, Huh, maybe I can actually win something here. I’ve always wanted to win a national championship. It’s been my goal. And I thought it would take a few years, or maybe even more time … But it’s happened!

Do you get nervous out there?

I don’t really get nervous when there isn’t a crowd. But crowds happen a lot lately. I mean, I don’t want to miss a birdie in front of a lot of people! But at the same time, because I actually won, it feels like people don’t really care if I miss.

How do you motivate yourself?

I try to see it as something really easy so it never feels like too much to handle. I don’t know if other people see it that way, but I do. I already put a lot of pressure on myself. What I try to live by is train like you’re in second place though you want to be in first.  You need to be confident to push yourself. But you also need to be doing what you actually want to do. You can’t do something that feels too hard. So if I see it as easy, it’s a fun thing that I want to keep working on. And it works for me.

What do you wear for an event like this? Is there a dress code for a clays champion?

No there’s not really a dress code! Just about everyone wears a hat. And you’ve got to wear your shooting glasses and earplugs for safety. But with all that, I just like my jeans and Sperrys.