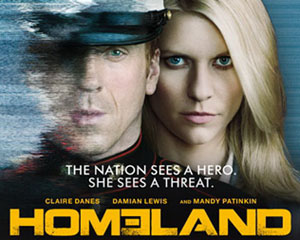 Modern television is now home to some of the best, most engrossing storytelling happening in American culture. Audiences loved last year's evening at National Writers Series with Breaking Bad creator Vince Gilligan, and before that Mad Men writers and producers Janet Leahy and Lisa Albert. This exclusive, one-of-a-kind event has become a signature evening and much anticipated by National Writers Series audiences.

Critics have hailed Homeland as the best thing on television, period. Think of this drama as a "filmed" story you might read in The New Yorker, influenced by deep character study and gripping suspense. Earlier this week, Homeland was television's big winner of the evening at the 70th Annual Golden Globe Awards. Stars Claire Danes and Damian Lewis won Best Actress and Best Actor in a television drama, and Homeland was named Best Television Drama.

Having just finished its second season, Homeland continues to paint a fascinating portrait of modern America. The show features two of the most compelling characters in television today, Sergeant Nicholas Brody (Damian Lewis), and CIA officer Carrie Mathison (Claire Danes). Both Lewis and Danes won Emmy Awards for their performances as the American POW turned suspected terrorist and the troubled intelligence officer who pursues him.

Chip Johannessen will take the National Writers Series audience backstage as he and Doug Stanton explore how Homeland is brought to life from script to screen. Johannessen is bringing pages from his favorite scripts to accompany a select reel of Homeland moments.

A Detroit native and Harvard graduate, Johannessen began his career as a television editor and writer for, among other shows, Beverly Hills, 90210 before producing and writing for the hits Dexter and 24.

Now as a multiple Emmy and Golden Globe Award-winner, Johannessen is enjoying critical acclaim and commercial success with Homeland. In September 2012, Homeland made television history when it did something no other show has done in 25 years: it won four out of five of the major drama awards at the Emmys—Best Actor, Best Actress, Best Writing, and Best Series.

Don't miss this rare chance to meet and talk with Chip Johannessen, one of television's most creative and successful writers and producers. This evening is a combination front row seat and backstage pass to what has been called the most addictive and engrossing show on TV.

Tickets for an Evening with Chip Johannessen can be purchased by calling the City Opera House box office at (231) 941-8082 or online at cityoperahouse.org— $20 in advance; $25 at the door.