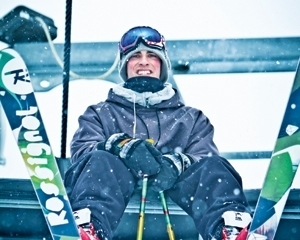 It’s a season that Will Johnston starts dreaming about in June, but when it’s actually here, as in snow is on the ground, his routine goes like this. He gets off work, puts on his stoplight yellow parka that hangs to the knees of his baggy camo-green pants, grabs his twin-tip skis made by the indie company High Society Freeride and heads back to … where he works … which is The Monster Energy Terrain Park at Shanty Creek Resorts’ Schuss Mountain. Johnston is a legend here, so young heads turn whenever the wiry 38-year-old who pulses with teen-decibel energy lines up at the terrain park gate. His fan base is so strong that Facebook pages smoked all over Northern Michigan when he made a lateral career move from Crystal Mountain Resort to Shanty Creek Resorts last Christmas.

At just under 40, Johnston is a neat metaphor for the watershed moment occurring in Northern Michigan terrain parks: the ski industry’s bad boys are coming of age, and the sport is too. He’s old enough to have had his lift ticket ripped off for jumping and committing other airborne acts of gray matter–defying feats. But he’s also old enough to appreciate the value of the business deal that has the Coca-Cola–distributed Monster Energy Drink sponsoring Schuss’s terrain park (formerly known as Purple Daze)—a place where it’s now okay to perform most of the stunts that made Johnston a scourge of the slopes when he was young.

The most immediate effects of the Monster sponsorship are the park’s eight new Monster-green terrain features sporting the Monster Energy logo, built by the über-cool, Idaho-based Planet Snow, a company founded and owned by Ryan Neptune, former U.S. Snowboard Border Cross Champion. The simplest definition of a “terrain park feature” is something—rail, box, wall, fallen log, a jump—that snowboarders and twin-tip skiers head for pell-mell, jump (or jib) onto, scream up and spin off—in search of as many rotations and creative body contortions as possible, all known broadly as tricks. An advanced boarder or twin-tip skier (called collectively park riders or riders) could be traveling up to 40 miles per hour. Rotations are labeled by degrees, with each 180 equal to a half rotation: 540 (one and a half rotations), 720 (two full), 900, 1080’s, 1260’s, but call them 5’s, 7’s, 9’s 10’s … a rider wants speed, height and style.

Last year, Johnston had so much fun during the soft opening of the Monster Energy Park that he tore his Achilles. “You will get hurt doing this,” he says, his hazel eyes exuding a persistent state of stoked from over a plate of enchiladas at a recent lunch interview. “You just play through the pain.”

Ouch. So why the passion for what Johnston calls simply, “park”? He explains it this way: “I used to ski race, but there was no creativity in it,” he says. “It was just going around gates as fast as you can. In park there’s a hundred different ways to hit a feature, a hundred different ways to do tricks. The more inventive you are, the cooler it is.” He pauses a moment, puts his fork down, and adds: “This is the future of the industry.”

Creative, inventive and—key for Northern Michigan ski resorts—you don’t need a lot of vertical. In fact, you don’t want steeps in a terrain park. What’s more, short lift rides translate into more time to do tricks. And powder? Forget it. Feet of fluff mean cleanup time in a park. What sounds like a perfect MO for Northern Michigan ski slopes, is. And after an initial Midwestern aw shucks reaction to the terrain park phenom, the region is embracing its gnarly park potential, big time.

A first cousin to skateboard parks, terrain parks began back in the mid-1990s with snowboarders looking to push the boundaries of fun. Back then, Ryan Neptune recalls, even the big Western resorts didn’t imagine budgeting for terrain features and the tools—the rakes and shovels—that it takes to groom around them. So before competitions, Neptune began fabricating the features he wanted to ride and the tools needed to groom them. That effort resulted in Planet Snow, a company that now consults or builds anything and all things ski related across the earth’s skidom.

Salomon’s 1080s, considered the first commercially successful twin-tip skis, hit the market in 1997 and taught skiers that they could do all the tricks that boarders could do in terrain parks, half-pipes and anywhere else they chose. Plus, twin-tip skiers didn’t have to stop to take a boot out of a binding and put it back in again. Park riding for skiers had hit its stride.

The terrain park explosion didn’t shake Northern Michigan, however, until a couple of years ago. That was partly because of the fear of liability issues. “The pendulum has swung from ski companies not wanting to get involved to the industry teaching itself to do it as safely as possible,” says Nub’s Nob’s general manager Jim Bartlett.

But also, says Neptune, whose first-ever visit to Michigan was in 2006 to build a half-pipe for the private Otsego Club in Gaylord, the region had to get over a basic lack of self-esteem. “I was absolutely perplexed at how little you guys thought of yourselves. It was lower than dirt. People said to me, Can we do something like they do out West? I said, Why don’t you do something like you should be doing in the Midwest?”

So Neptune’s team rearranged some earth, turned on the snow guns and showed the Northern Michigan ski industry what it could be by constructing an Olympic-sized 500-foot-long, 22-foot-deep half-pipe at Otsego Club. Then he picked up the phone and lured 13 snowboard teams from around the world to train on their way to the 2010 Vancouver Olympics. Granted, the Olympians, who included Australian 2010 gold medalist Torah Bright, were like, Um, really? when they first arrived in Northern Michigan.

“We were driving here at night, and everything looked so flat. We weren’t sure if we had made a mistake, this was the wrong place?” French snowboarder Olivier Gittler told The New York Times.

But the quality of Planet Snow’s half-pipe combined with the brief three-minute chairlift ride—as compared to more than three times that at big mountain resorts—made fans of the Olympians. “You look around, and you see no real mountains here, but this is the best training we could possibly have right now,” Gittler went on to tell the Times.

While Neptune, like most other industry insiders, sees the grand age of the half-pipe on the wane—they are simply too costly to build and maintain relative to the amount they are used—the Otsego model translates nicely to more economical terrain parks, something kids in the Midwest are clamoring for just as much as kids at more glamorous mountain resorts in the West and East. Neptune, in fact, is currently developing a small rope tow–serviced terrain park called Hawk Island, near Lansing.

Accordingly, Northern Michigan ski areas are buffing up their parks (and self-esteem) as well as catering to younger and younger riders. “Five years ago, if a resort had one terrain park they were set,” says Ken Griffin, Boyne’s director of snow and adventure sports marketing. “Now we’re seeing a whole progression of terrain parks at resorts.”

Just this season, the Boynes are adding new Burton (as in the snowboard company) Riglet Parks for kids aged 3 to 6. Caberfae Peaks is doubling Jibber’s Park and lengthening Cammy’s Terrain Park to include a new jump. Besides the Monster Energy Park, Shanty Creek is building a mega-jump run called the Big Air Launch Pad and adding Low Riders, a beginner’s park for kids and so that “adults can sprain their ankles instead of breaking them,” half-jokes Chris Hale, vice president of sales and marketing at Shanty Creek.

The terrain park culture, an echo of the skateboarding world, has evolved too—although Johnston insists that the snow ethos is friendlier than skateboarding’s got-an-attitude. “Give respect—and you’ll get respect,” Johnston says. “Be polite, be cool, be respectful and you will get a bunch of respect.”

Hang around a terrain park, or ride the lift over one, and you’ll see kids gathered at the gate, shouting encouragement to someone who has just called “Drop” before gliding off to stomp a trick—perform it successfully. At the Monster Energy Park, where there’s a bonfire between two runs, they’ll be gathered in a knot of fluorescent polyester—gangster-baggy styles for the skiers, skinny pants that mimic skinny jeans for the boarders—and exaggeratedly long Dr. Seussian-esque hoodies with mismatched swatches of screaming neon.

You might have just hit the slopes for the season, but before the snow even fell, these kids were hitting rail jams—events where rails and jumps are jerry-rigged in parking lots then covered in ice shavings from the nearest indoor ice rink in preseason. Or maybe they’ve built their own backyard features, covered in artificial turf so they can ski or board in August.

And GoPro cameras are omnipresent, ski videos being the glue that holds this sport together. Hours on websites like YouTube, Vimeo or Newschoolers watching homemade ski videos help riders stay connected when they aren’t in the park. Video is also how riders pass tricks along. Watch and learn. Then shoot your own footage. Go home, edit it, set it to music. Upload it. That’s the story, says Neptune, of why sponsors like Monster Energy are attracted to terrain parks. “Those rails are a billboard,” Neptune says. “If [a company] can get its rails in videos and photos, the exposure is way larger than network television.”

That’s a marketing model that works just as keenly for a region that’s found a level—or, more to the point, at least not so vertical—playing field it can compete on.

Round Up: Explosion In The Parks

You say Northern Michigan. We say, choose your terrain park.

Parks: 3 Named #1 in Michigan and #3 in the Midwest by readers of Transworld Snowboard magazine in 2012.

Sickest Feature: A three-piece jib station that can be changed over the course of the winter.

Amplitude: Height a rider achieves after launching from a feature.

Bonk: Riding up to a feature, such as a barrel, and tapping it with your skis.

Dropping: What you call before pushing into the terrain park—with your arm raised if it’s crowded.

Gaper: A clueless skier or snowboarder—generally a weekend warrior.

Grab: Touching your board(s) while airborne. Riders seek variation in where on their board(s) they grab and in what body position they are in when they do it.

Grind: Riding across any box or rail.

Jib: Feature that you ride. Not a jump.

Pop: Small hop riders use to launch off a feature and achieve better trajectory.

Slopestyle Park: Park that is set up so that riders flow from feature to feature. As opposed to a hike-in park where you hike back up to hit a feature again and again.

Stomp: A no-hands clean landing. Johnston expounds: “You landed clean and rode away. You stomped it.”