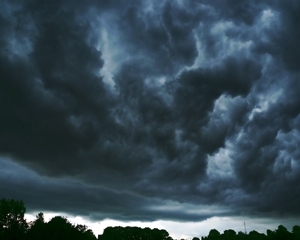 As the rest of us watched Hurricane Sandy play out on television screens and saw its side effects in monstrous Lake Michigan waves, the 30-person claims team at Traverse City–based Hagerty Insurance, the largest insurer of classic car and boats in the world, was buckling down for some serious overtime. Company CEO McKeel Hagerty fills us in on the biggest storm that his company has ever faced.

So you’ve seen more loss from Sandy than any other event in your company’s history?

Yes, it was really bad. I was talking to one of our field guys out there, and he was saying that when you go into the really bad areas you see that this storm was 10 times worse than they are showing on the news. For us it was three times the size of Katrina. It’s a bigger population area and there are a lot of [classic] vehicles out there—especially in Long Island. It was big and bad.

How many employees do you have on the ground in the area that was hit the hardest?

About a half dozen—it was very difficult to get anyone in there.

Your videographer Jeff Morgan was one of those people. This video is maybe more dramatic than anything I’ve seen on the news.

Yes, and we ended up deciding to cut parts out about bodies floating in the house next door, that sort of thing. Getting that video made was something that we felt was really important for us to do.

How did it play out in Hagerty’s Traverse City headquarters?

The phone calls started the morning after. As soon as people could get their phones working. We were getting 200 claims a day at the peak.

Collector vehicles have turned out to be one of the greatest investments that the folks in this storm could have made. Can you explain?

Yes. The reality is that most homeowners’ policies don’t automatically include flood damage. Flooding is not typically covered in a policy unless it is specifically purchased, and it is expensive. So here they are, their homes are destroyed and the contents of their homes are not going to be paid for. The only things that are going to pay are their auto insurance policies—the regular cars that were all under water, the collector cars, and the boats. That insurance money will be these people’s only source of funding.

And in some of the small towns, the really sad part is—and we saw this in Katrina too—so okay, you lose your home and insurance. But, if say, you worked at the corner store or the shop down the street, well, that’s gone too, so you’ve not only lost the biggest asset you have but you’ve lost your house, you’ve lost where you work. It is kind of a double whammy. For us in our claims department you know you’re dealing with some pretty devastated people and it’s tough to deal with it.

How do you help your employees deal with it?

We make grief counseling available to our employees because it’s really a difficult emotional thing to deal with somebody who has lost everything, and the only thing that they are going to get is the check that we send. You take 50 calls like that, and it’s just rough. You don’t want to take that energy home with you. You want to give them somebody who will listen to them.

Any other special treatment for employees working this hard?

We had a masseuse on site and did all of the cookies, casseroles and pizza dinner kinds of things. At the height of it [employees] were working from 5:30 in the morning until late at night. Very long hours.

Are you finding that most of the cars are a total loss?

About 70 percent of all the losses are total, but in about 50 [percent] of that 70 percent [of cases] people are choosing to keep the car for salvage even after it has been totaled.

Amid all of this chaos and loss, these folk want to rebuild a collector car that is totaled?

Yes, that’s one cool thing—there’s been this huge emotional impact but there’s this ray of hope. Oftentimes the sentimental value of these cars is worth more to people than their financial value. But the owners are willing to start over because these cars can be fixed. That’s the beauty of it. A modern car with all of its electronics and everyone else, those are really tough to fix. But a ’57 Chevy has zero electronics in it. Those can be fixed. The engine can be flushed. The interior can be replaced. You worry that with the saltwater you can have rust problems if you don’t really get it out, but you can restore them if you do it right.

How has Hagerty’s response rate been?

We’ve paid 70 percent of all the losses already so we’re almost there. We’ve heard a lot of our competitors haven’t even gotten adjustors on site to look at cars. Even so, we know we can always do better and next time we’ll be even more prepared.

Besides quick, efficient service, you’ve responded in other ways:

We’re trying to connect to the global car community—the Camaro clubs, Corvette clubs, Mustang clubs—to the fact that a lot of these cars have been destroyed, so, hey, if you have a bunch of spare parts get ready because there are going to be [car owners] in New Jersey who need them.

We also immediately made a $10,000 donation to the Red Cross and invited our customers to donate as well. I think about 50 people have taken us up on that so far. Those are the things I think you need to do.

These claims add up to a staggering amount of money. How will paying them affect Hagerty Insurance?

After Katrina we took a lot of measures to make sure that we could never have a single event that could take us out of business. Katrina was in that way much more shocking. This was much larger, but we were ready. So it’s a huge economic event, it’s a big emotional event but we’ll be ready to fight another day. I think that’s our job.

You talk to old guard insurance guys from the ’70s and ’80s, and it was a complete rolling of the dice. If a big one hit, they were all out of business. Just boom—the day after a hurricane there’d be guys up on ladders taking the signs down.  You can’t do that anymore. People expect a well-run organization to try to be able to absorb something like this.

With weather patterns getting fiercer that seems like a daunting task.

We’re looking at developing more of a CAT [Catastrophic] team approach. All the team would do is think about these things. Heaven forbid that this ever happens again in our lifetime but if it does we’ll be more ready to get people on the ground earlier.