Traverse City Music: Robin Lee Berry and Glenn Wolff at Inside Out 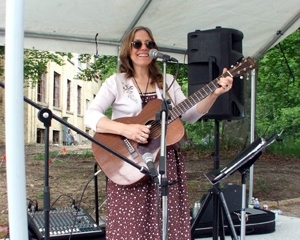 Traverse City Music: Two familiar faces on the local music scene will be joining forces Dec. 6 at the Inside Out Gallery in Traverse City.Vocalist and guitarist Robin Lee Berry and bassist and guitarist Glenn Wolff will perform several originals as well as an eclectic choice of covers, ranging from smoky torch songs to jazzy interludes and folky fare as well.

Mixing it up like that is just the way Berry likes it. A veteran of the folk scene throughout Michigan and the Midwest, she also has one foot in the jazz door, performing with the Bay Area Big Band and the NMC Vocal Jazz Ensemble. (Full disclosure: This writer stands next to her in Vocal Jazz, and tries not to sound too out of place.)Add in a few fillips of rock music, courtesy of covers of such artists as Neil Young and the Rolling Stones, and you’ve got an adventurous palette from which she chooses which pieces to play.

Berry says that for her, the opportunity to write and perform music fulfills a basic need.“I’ve got this pressure cooker in the back of my head: I’m supposed to be writing music, playing music,” she said.“Music is such a bizarre element on the planet. It has a transformational energy.”

Berry has been working with that transformational energy most of her life. She now co-owns and runs Freshwater Gallery in Boyne City with her husband Tony, and the two host and promote numerous concerts there throughout the year. But she makes it clear that she still has a jones for her own music. Among the tunes she will be playing are compositions earmarked for a new recording.

“There’s a lot of stuff for the new album,” she said. “There’s some somber, serious, message tunes. But I’m trying to get some lightness, happiness, joy as well.”

Berry says that many of her fans see her music as something deep or heavy. “Like, ‘Oh, she’s gonna make me cry.’ I’m trying to find those things that lift me up. Music does that.”

She is also looking forward to playing with Wolff, one of her favorite cohorts.

“Glenn and I have played together before,” Berry said. “Whatever we play, it feels like we’re attached. We know each other, feel each other.”

Wolff is adding dobro and slide guitar to his usual bass work. Berry says that whatever the instrument, the duo is in lockstep.

“He’s so easy to work with – he’s just right with me. It’s the complete icing on the cake.”

The duo may also be welcoming some additional guests to further flesh out the sound.Whatever the format, Berry promises variety will be the spice of her performance. “It’s a crazy, eclectic mix of music,” she said. “Contemporary folk jazz originals, and every once in a while a danceable beat.”

Robin Lee Berry and Glenn Wolff will perform at the Outre Lounge at the Inside Out Gallery from 7 to 10 p.m. Thursday. There is no cover charge.