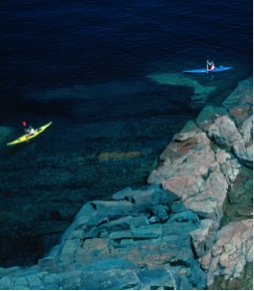 Northern Michigan Vacation: Enter for your chance at a summer family vacation in Michigan's Upper Peninsula at Mount Bohemia!

Enter for your chance at a summer adventure kayaking and hiking Mount Bohemia for your family of four for two nights.

Can't wait to win? Check out Mount Bohemia for your family.

Mount Bohemia is an 1100 acre resort and the only all inclusive resort in the Upper Peninsula.  Every activity offered during the summer/fall season is covered under one lodging price.   Your trip includes all of the adventures, breakfast, lunch and dinner and lodging in a trailside cabin for four for two nights.

•    Sea kayaking  on Lac Labelle with all equipment provided including sea kayaks, life jackets and paddles. Plus guided sea kayak tours are available on Lake Superior.     •    Biking on old logging roads at Mount Bohemia and on roads near the Mountain; bikes provided.
•    Miles of hiking trails on-site at Mount Bohemia.
•    Bete Gris Beach located on Lake Superior just three miles from Mount Bohemia Adventure Resort.  Considered one of the nicest beaches in the Upper Peninsula.

Lodging in a Trailside Cabin

Your trailside cabin sleeps four and each unit has it's own bathroom with a shower. Among the cabins is the common building where guests can meet and enjoy the fireplace while they play board games, cards or watch satellite TV.