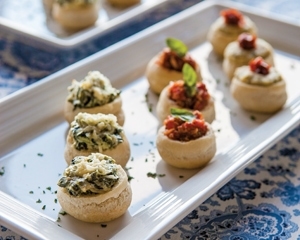 Northern Michigan Food & Wine: Make a pretty platter for your next holiday gathering, and you’ll be a star of the class too.

Andrea Pellicci had been in accounting and was feeling the need for a midcourse correction. She wanted something more creative, more active, so she took a year’s sabbatical to figure it out. Her chosen path was to open a foods specialty store, but she figured she needed a culinary degree to bolster her business background. “I loved every minute of it,” she says of her time in NMC’s culinary program. Now graduated, Andrea is saving up to make her dream a reality and keeping her cuisine skills sharp doing some personal chef work and researching trends. She chose to make Crispy Prosciutto with Cranberry Ginger Chutney and Ricotta Cream for her A+ Holiday Appetizer in part because prosciutto is one of her favorite meats. “Also, I thought about how the flavors would mesh, the sweetness of the cranberry sauce, the saltiness of the prosciutto, the bitterness of the arugula, and it just seemed different and fun.”

Her parents are from Cuba. Her great grandparents are from Spain. So the foods in Stephanie Gallego’s Miami childhood home expressed the legendary flavors of those spirited nations. Little surprise, then, that Stephanie always enjoyed eating. “My fondest memories are of meals at big family gatherings,” she says. Her own cooking passion kicked in about junior year of college, when she’d come home from class most days intent on cooking a new recipe. After graduation, marketing degree in hand, she took a job at a popular steak restaurant in Miami and was instantly smitten with the industry. “I loved it. The atmosphere, the people, how they felt—every bit of it,” she says. That enchantment combined with her burgeoning fascination with cooking led her to Northwestern Michigan College’s culinary program.

For her adorable A+ Holiday Appetizer, Stephanie wanted a recipe that was doable for the everyday cook—hence purchasing the pre-made frozen bread bowls. “Not everybody wants to spend all day in the kitchen making a bunch of appetizers,” she says. “Especially at the holidays, you want to be with people.”

Stephanie is currently interviewing for catering jobs in Chicago.

In Nikki Cook’s earliest memory of cooking, she is maybe 3 or 4 and is standing on a chair at the kitchen counter. Her mom has the KitchenAid mixer out, and they are making cookies. What kind of cookies? “Definitely chocolate chip cookies,” she says. Now a couple decades later, the desire to bake still runs strong. Some day she’d like to start her own bakery or restaurant, which explains why she liked her Cul 295 class—How to run a restaurant.

Nikki graduated in August and since then she says, “I cook dinner all the time for my family.” They especially like her cakes. “I make some really good cakes, and they go crazy for every one of them. They always take pictures of the cakes, and then they always want another piece.”

Nikki chose to make the Brie en Croûte for her A+ Holiday Appetizer because “it’s just really a holiday thing, and cheese is always popular, and it’s a pretty simple dish too.”

We caught up with Nikki as she was preparing to head to Sun Valley, Idaho, to work the winter as a ski resort chef.

When Jordan Blodgett thinks back on his days in NMC’s culinary program, the class that stands out is one in which he learned the arts of charcuterie. “It was a lot of fun working with the meat, smoking, making sausages and pâtés,” he says. That interest carried over to the A+ Holiday Appetizer, Venison Bruschetta with Sweetened Cranberries and Sage Leaf, he offered up for our readers. Jordan sourced venison from an authorized venison seller and concocted the recipe.

“I chose this recipe because I love sweet, spicy and savory one- or two-bite appetizers, and I hunt every year and love venison,” he says. He enjoyed his culinary handiwork so much he made the appetizer for his own family at Christmas.

Last summer, Jordan worked an internship at the prestigious Hyannisport Club, adjacent to the Kennedy Compound on Cape Cod, building on the skills he’d learned in class, like core knife skills and refining his mastery of the mother sauces—béchemal, veloute, Hollandaise, tomato sauce and espagnole (the sauces that form the basis of most sauces).