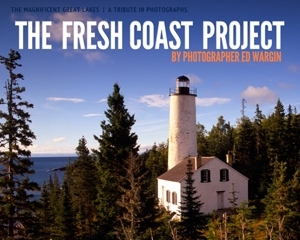 It is an axiom of the environmental conservation movement that we won’t fight for something we don’t love, and we can’t love something that we haven’t experienced.

By sharing his images, Wargin hopes he can help elevate the Great Lakes in the consciousness of America, help the lakes he loves earn the respect and awe and fan base that they will need in coming decades if they are to thrive.

Turning to social media and crowdsourcing, Wargin has launched a Kickstarter project to help him complete the images needed to round out the collection. Kickstarter enables anybody on the Internet to invest to help projects get off the ground.

The Fresh Coast Kickstarter enables investors to buy in at different levels of funding and receive premiums based on level of investment, such as high-quality photographic prints and even a two-day photo workshop on the Lake Superior coast with individual instruction by Ed Wargin.

Check out The Fresh Coast Kickstarter project at kickstarter.com

Photo(s) by The Fresh Coast Project