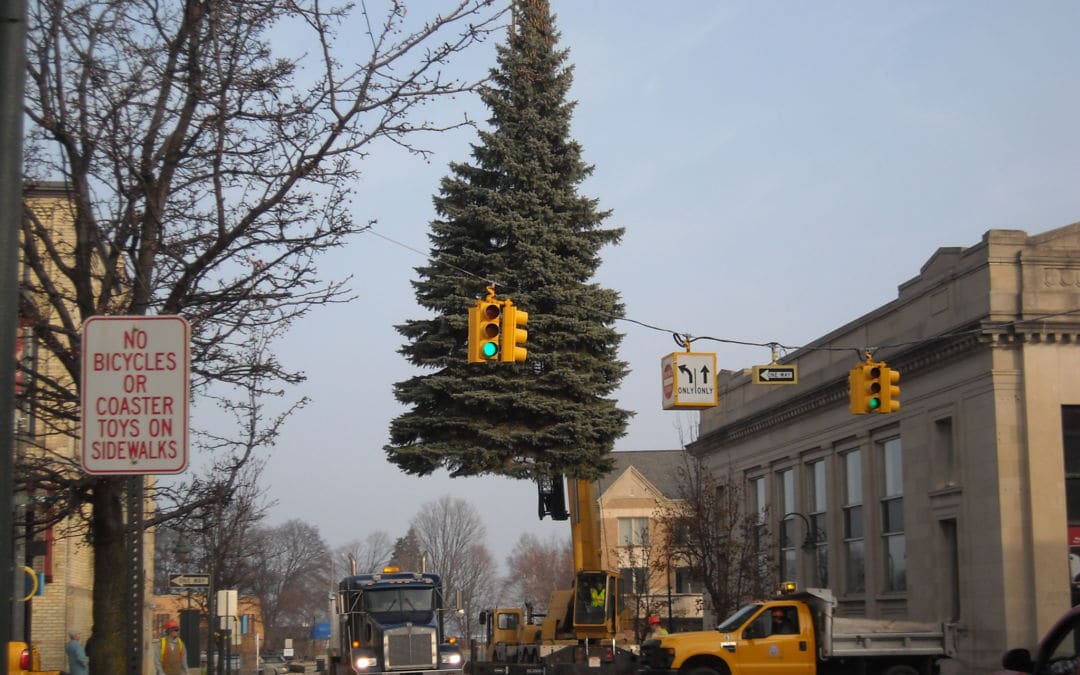 Not to be a scrooge to a sister Michigan city, but really how could Birmingham? Purchase an artificial “official” city Christmas tree, that is, in a state that banks on the reputation of real, fresh cut Christmas trees (the Michigan Department of Agriculture and Rural Development says our Christmas tree production ranks third in the nation). According to news sources, Birmingham purchased its artificial tree for $30,000 citing cost and safety concerns because the live tree it traditionally decorated had gotten too shabby and unsafe. The tree came with lights and it is hoped the tree lasts 10 years—though the lights will probably need to be replaced sooner.

So maybe the old tree needed to go, but, we have to ask, why a grown-in-Michigan fresh cut wasn’t the answer?

Which got us thinking, so how does our smaller, humbler Traverse City manage to come up with a stunning downtown Christmas tree—located smack dab in the middle of Cass Street at Front Street—year after year? To find out, we rung up Lauren Vaughn, superintendent of Traverse City’s parks and recreation department and the Santa Claus charged with finding a tree for the city every year, for the 21 years Vaughn has been superintendent.

Yo … ho, ho, Birmingham, maybe this lesson in Northern Michigan ingenuity and neighborly generosity will help you back to your roots:

MyNorth: So where did this year’s Traverse City Christmas tree come from?

Vaughn: From the Days Inn on Munson Avenue.

MyNorth: Really? I’d imagined it being cut down by Paul Bunyan types wearing buffalo plaid shirts on a farm out in Grand Traverse County somewhere.

Vaughn: No. Every year that I’ve done this, somebody always wants to donate a tree that they don’t want anymore. It’s either too big or too close to their house or building or something.

MyNorth: Who does the actual selecting?

Vaughn: I do. I keep a running list of people who want to donate trees—there are about 150 people on it and I have names from back in the 1990’s—and then I drive around a take a look and select it myself.

MyNorth: So what kind of places have the trees come from?

Vaughn: Mostly private residences but one year it was from Cherry Knoll Elementary School and another time from the Northwestern Michigan College Boardman Lake Campus. One year it had blown down in someone’s yard after a bad windstorm.

Vaughn: [laughs] It’s interesting because occasionally someone will call and say we have a great tree. Really nice tree. So I’ll go look. And you think … how could they think that is a good tree? This year I went and saw one and the trunk curved four or five different times and it was only about 25 feet tall.

MyNorth: So what was the tallest Traverse City Christmas tree ever?

MyNorth: And how tall is this year’s tree?

MyNorth: What species are they, generally?

Vaughn: Over the years that I’ve been here I’d say that 80 to 90 percent have been blue spruce. But one year we had a Norway spruce and two years we had a Douglas fir.

MyNorth: And this year’s tree is?

MyNorth: Okay, so you select the tree—how do you get it to Cass and Front?

Vaughn: Every year since I’ve been here Team Elmer’s [Crane and Dozer] donates their time and machinery to get it here and set it up. Traverse City Park and Rec staff does the actual cutting, but Elmer’s puts it on the truck, takes it downtown and sets it up.

People wonder how it stands. We put in a manhole, four- or five-feet deep, specifically for the tree. We take the cover off and set the trunk in. Then we pound wooden stakes between the tree and the edge of the manhole and pour in a couple of 5-gallon buckets of sand to stabilize it.

MyNorth: Ingenious! How long does it all take?

Vaughn: It goes quickly. We usually meet Elmer’s there around 8:30 in the morning and by10 it’s set in the hole. It’s the lights that take so long to get on—about two or three days.  It’s a lot of work—you have to do it with a bucket truck.

MyNorth: Does Elmer’s do that?

Vaughn: No, Cindy Anderson, a parks and recreation employee is in charge of it. She’s been doing it for 16 or 17 years. It takes a lot of work.

MyNorth: How many lights are on the tree?

Vaughn: There are a total of 1,575 on the tree—1,125 on the tree proper and 450 on the new star that was created this month for this year’s tree (and future years as well). The tree lights were donated by Traverse City Light & Power last year in recognition of their 100 year anniversary. The lights of the star are from the Traverse City Downtown Development Authority. All lights are LED lights. These lights save a lot of electricity and also require us to run two extension cords where we used to use 15 to 20 exentension cords.

MyNorth: So the tree is free, getting it downtown and setting it up is free, the lights are free, beyond the cost of the power to turn them on, it seems like there’s the only cost is the Parks and Recreation labor involved in cutting it, stabilizing it and putting on the lights?

MyNorth: I don’t know if you heard it or not, but a downstate city made headlines recently for putting up an artifical Christmas tree. The mayor was quoted as saying that now that they have an artificial tree they have a “proper” Christmas tree. Is there any behind-the-scenes wizardry that goes on to give the downtown Traverse City Christmas tree its wow factor?

Vaughn: Sometimes we have to wire in branches to fill a bare spot.

MyNorth: Any Northern Michigan Scrooges out there who don’t like having to negotiate around a live, green, monster-sized obstacle in the middle of Cass Street for a month or so?

Vaughn: Nope. There’s never been a complaint. Every once in awhile a truck hooks a string of lights on its mirror. But other than that, no problem. It’s always fun to be downtown as we are setting the tree up and to get the reactions and thanks from shoppers and merchants. It helps them get in the holiday spirit and the tree lighting ceremony is always a good time. It is especially rewarding to the department when we get compliments on the tree.