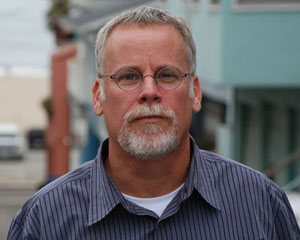 Michael Connelly is the creator of Harry Bosch, a jazz-loving LAPD detective who is featured in seventeen of his novels. Connelly launched the Bosch series in 1992 with The Black Echo, which won the Edgar Award for Best First Novel by the Mystery Writers of America. A crime reporter-turned-novelist, Michael Connelly has sold over 45 million copies of his books and has won every major mystery writing award available. His novel The Lincoln Lawyer was adapted into a hit film starring Matthew McConaughey in 2011.

Connelly will appear at the City Opera House for National Writers Series conversation with guest host Bryan Gruley a bestselling author and Pulitzer Prize winning journalist. In a recent phone interview, Connelly spoke with Bryan Gruley about his upcoming trip to Northern Michigan and his new book, The Black Box.

Bryan Gruley: Have you ever spent any time in Northern Michigan?

Michael Connelly: Nope. The only places I’ve been in Michigan are Detroit and Ann Arbor on book tour. I live in Tampa, Florida, and a number of people I know go up there to escape the heat. You always hear how beautiful it is. It’s one of the perks of my job to see new places. I’ve heard about the (NWS) program. It sounds like, for a reasonably small town, it has so many people devoted to books and to reading. That’s great.

Bryan Gruley: What would you like your audience Up North to know about your appearance?

Michael Connelly: You and I will have a stimulating discussion about what makes a book tick. You know, it’s a crazy thing to think I’ve written twenty-five books and I’m in my twentieth year of being published. But there it is. I’m proud of that. And I think my next book is pretty good.

Bryan Gruley: Tell me about the new book, The Black Box, to be published November 26.

Michael Connelly: I kept those anniversaries in mind as I wrote it. My first book was published in January ’92, three months before one of the biggest stories I ever covered, the riots ripping apart Los Angeles. Stuff happened to me when I was covering the riots that I think about often. I built the whole story of The Black Box around those riots. It was a very satisfying book for me to write because of my connection.

Bryan Gruley: The National Writers Series raises money for scholarships for young writers. What advice do you have for young people aspiring to be writers of fiction?

Michael Connelly: You’ve got to pull it out from within. You can’t put your finger up to the wind and think, ‘What do they want?’ It has to be something of vital interest to you. It’s not necessarily ‘write what you know,’ but write what you feel inside. Then you have to put your head down and write every day. If you don’t write every day, you won’t be a better writer.

Bryan Gruley: What about young writers aspiring to a journalism career?

Michael Connelly: You should answer that, not me. I haven’t been a journalist in 14 years. The business has changed so much, you really need other skills than I needed. Back then, you had to know how to type fast and how to be curious and dogged. But there’s a level of technological expertise required that wasn’t required before.

Tickets for Connelly and Gruley's segment at the National Writers Series begin at $20 and can be purchased at whartoncenter.com. The Traverse City Opera House is located at 106 E. Front Street and can be reached at 231.941.8082.