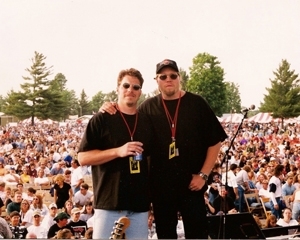 Traverse City Events: This month, keep your eye out for the cameras. Traverse City’s own Bihlman Bros. have been given the green light to film the pilot episode of a new reality TV show tentatively titled “Blood Brothers” for a Hollywood production company.

The Bihlman Bros. and production team will be filming in and around Traverse City the week of November 27, culminating with a live performance at Union Street Station on Saturday, December 1. The show is open to all and will be a chance for Bihlman Bros. fans of Northern Michigan to come out and represent to the entire USA by showing their support for the home town boys, and getting a chance to be on national TV!

The show’s premise is to detail the lives of Jabo Bihlman, Scot Little Bihlman of the Bihlman Bros. and their older brother Charlie while they are out on the road “doin’ it” as a successful working band. Jabo and Little hire their older brother Charlie to be the road manager. The thing is, as a professional welder, Charlie has no idea about the music business. But the economy is in the tank, Charlie has lost his job, and Jabo and Little need a road manager! The perfect storm. Chaos will no doubt ensue as the Bros try to show Charlie the ropes, while giving him just enough rope to hang himself.

It’s all about three brothers sticking together through thick and thin, helping each other, laughing together, screaming at each other and ultimately showing that between “Blood Brothers," blood is truly thicker than water!