Traverse City Events: 'Asleep at the Wheel' back at City Opera House 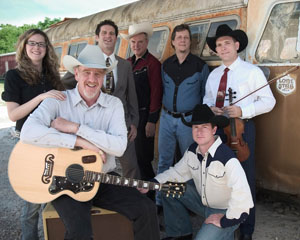 Traverse City Events: Asleep at the Wheel has been entertaining audiences with its twangy take on swing music for over 40 years. Since forming in 1969, the group has released more than 20 albums, won nine Grammy awards, and performed for countless thousands of fans across the globe.

Asleep at the Wheel leader Ray Benson spoke with MyNorth.com about the group, its past and its future.

MyNorth: What’s new with Asleep at the Wheel?

Benson: We’ve been making a documentary film on the band. We’ve been filming for two years. It’s a then-and-now. I was watching a piece of film from the Dinah Shore show with Bill Cosby, from Mike Douglas in 1974.

MyNorth: After 40 years, how do you still maintain the enthusiasm for this?

MyNorth: How many different players have been in the group over the years?

Benson: We’ve had 100 members. But the (current) lineup is pretty stable: David (drummer David Sanger) has been with me 26 years, our bassist 20 years, our fiddle player 17 years. Of the 100, I think I’ve only fired three. The rest left for various reasons. It’s a tough life. We’re on the road 180-200 days a year, 250 when we started out. We make a living, but as Vince Gill said, there’s no pot of gold at the end of the Western Swing rainbow.

MyNorth: Is there a Western Swing rainbow at all?

Benson: Yeah, this is a dream of ours, to play American roots music, swing.

MyNorth: You’ve been at this so long you’ve got a great number of songs to choose from. What songs will you be playing at your show here?

Benson: We’ve got almost 50 years of music, and 90 minutes to two hours to fit it all in. We always do a couple songs, like “Route 66” and “Miles to Texas.” Then there are songs we often do, like “Choo Choo Ch-Boogie” and “Beat Me Daddy Eight to the Bar.” We’ll do some Bob Wills. But (the rest of the set), it’s not planned ahead. Whoever yells (a song title) loudest from the audience.