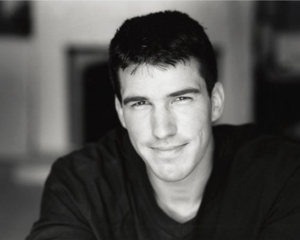 Author, actor, artist, stone mason, soldier Benjamin Busch is the next author coming to Traverse City’s Opera House for the National Writers Series on Thursday, November 8. Busch’s new memoir Dust to Dust breaks new ground in memoir writing and offers readers a literary and philosophical view of parents, children, the war in Iraq, life, death, impermanence and the power and consequences of following your dreams.

Busch set off in March on a 50-state book tour, and has only been home for 3 ½ weeks during that time. He was in Maine when we spoke, battling the winds from Hurricane Sandy. “I started off in Michigan and I’m ready to be coming home to Michigan,” he said. Busch will be joined by host Doug Stanton in a lively evening of discussion and entertainment that promises to contain a few surprises—including prizes under seats in the audience, and free copies of Busch’s new film Bright to those who buy copies of his book.

Q. You’re a risk-taker. You took risks as a boy and as a soldier. What risks did you take with this book?

A. I’m fascinated by uncertainty. There’s a certain endangerment crossing into the unknown. The risk you take going into yourself. This is memoir. You’ll discover things about yourself. Your vulnerabilities make their way into the public. I didn’t think about it much when I was writing the book, but now that it’s out there—that’s what I notice. It’s risk.

Q. What prompted you to write a memoir and take that risk?

A. It was the loss of my parents that began this book. It was the child looking for his parents. As an orphan I had to find them, and they existed only in memory. What began as searching for them became my own journey.

People who really get this book are putting together pieces from their own childhoods. They suddenly understand the importance of building forts in their backyards. We don’t spend much time in our memory. We’re so fixated on what’s next. Preoccupied with our job, with our shopping list. What this book does is resets people, reawakens people.  It brings back people they think they’ve lost. People come up to me and say, “This book made me call my daughter or son or parents immediately.” That means the book did what it was intended to do.

Q. This book isn’t arranged like a typical memoir. You arrange sections by Blood, Stone, Metal, Ash, etc. Have other writers used this method of organizing by theme rather than by chronology? Did you study other books to make this work?

No, that’s the danger. Most memoirs record the memoirist. That’s the entertainment; you get a complete picture of that person when you read the book. Mine is exactly the opposite of that. This book doesn’t try to tell you about my particular life. I don’t consider myself exceptional in that way. My book is more about the reader. That’s why it’s divided into the elements: Stone, Water, Bone, Wood…

This book ain’t your average memoir. All memoir follow an obvious form—chronology from childhood on. My book doesn’t have what people expect to see in memoir. You have to walk in with open eyes and ears and let it ride.

Q. Your book starts out with “Arms” and describes your childhood love of guns and war games. You puzzled your parents by being so different than they are.  What about your own kids? Are they puzzling you with their own interests and fascinations?

A. Because of the book, I pay more attention to my kids’ childhood idiosyncrasies. Writing the book it became obvious to me that as an adult I followed my impulses as a 6-year-old. So now I stop myself and think, “Oh, if there’s a fascination here, this might be a creative urge that may define their life.”

I have two little girls. I have never been so surrounded by pink and glitter in my life. They’re also attracted to animals, insects and the magical life of stuffed animals that speak. That’s creative life taking form. I have to check myself when I think it’s not significant. They find it fascinating—all on their own. It’s not something I’ve given them so I know it’s unique to them.

Q. Your parents changed a lot. At first they wouldn’t let you have a toy gun, but soon they accepted your childhood love of weapon play, even giving you toy guns as Christmas presents.

A.That was my parents’ greatest gift to me. I absolutely baffled them. They realized very early that this was just who I am. If we deny these urges they won’t just go away.  I became so many things.

So many people put away the really strong fascinations they had as a child. They find a different kind of job, move away from those real urges. People come up to me and say, “I’m about to retire, and this book made me think about what I always wanted as a kid. I’m going to go back to that.” It was George Eliot who said, “It’s never too late to be what you might have been.” I hope this book may do that for some people. Make us fascinated again.

Q. You were the kind of kid who made bullets out of a box of 64 crayons. Did you meet other soldiers like yourself?

There’s something in the wiring in boys that attracts them to conflict and endangerment, and that leads them ultimately to the military and combat. War when it arrives is never what you expect it to be. It doesn’t get to be clear and simple and heroic. Even in its grandest intentions, it’s a disaster.

Q. As a soldier you write that you “slept in the ruins of Babylon.” What was it like being in a place of such ancient history and also making history?

A. My childhood was all about building castles, and here I was in one of the most famous castles of all time, a biblical one. How do you regard history when you’re the newest part of it? Here I was occupying Babylon. I was amazed by it.

My greatest concern is impermanence. Of disappearing. I hate that things go to ruin, that great works are lost, great people expire. That I will follow them, that my life will end and my work will fall into ruin. These forts I built as a child were an act of defiance.

A. Talking to Karl Marlantes, author of Matterhorn, he totally identified with that. As did Phil Caputo and other war writers. I didn’t feel scared. Not because of any machismo, but because fear is distracting and you need to focus. Other veterans say, “How was the war with you?” I tell them, “I’m fine. I write out my war memories. I film them. I incorporate them.” Then they look at me and say something haunting: “Give it twenty years.” These things come home to roost.

Q. What reactions have you had to the book? Memoir is often read more by women. Have you attracted both men and women readers?

A. This is a pretty literate book, so it goes in for that portion of the population that appreciates that. I’ve found women love the book. People think it’s a war memoir, which it’s not. War’s a part of it, but the book goes after these much bigger things. It’s about us as people. Women write me letters: “I finally really understand my son (or father or husband).”

Q. You’re just finishing a 50-state book tour. Wow. What was it like? Would you do it again for another book?

A. It’s been more taxing on my family than on me. I can take a lot of discomfort. My absence has been hard on my wife and daughters. Next summer I’ll stay home while she goes to Russia and researches. That’s what you have to do with two professionals; you have to change the guard.

I’ve driven 31,000 miles so far and spent a lot of nights on couches and sleeping in my car. I’ve slept in my car 33 nights. I’m the only Prius parked at the truck stop—where you can get a shower for $5-10. It’s better than a cheap hotel. But people have also opened their doors to me, including some wonderful writers.

I’ve given 130 readings so far. My publisher said we can give you an 8-city tour. “That’s not going to do it,” I told them. This tour is 197 cities in 50 states, that’s never been done before that I know of. I’m in Maine right now, my 47th state. Tomorrow I’ll be in Vermont for my 48th. Then back to Michigan for the National Writers Series and then afterwards I fly out to Alaska and Hawaii.

The publishing industry has stopped trying. My publisher was great giving me support for gas for most of the trip, and helped me launch everything, but after the first 6 weeks they have to move on. But I’ve found wonderful readers in places like South Dakota where no one’s been in years.