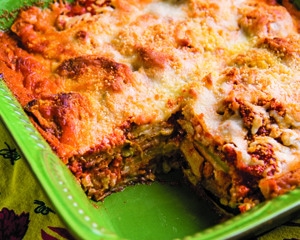 Ask Peggy Donaghy of Ethnic Garden Catering to think local for the menu at your event, and she’ll ring her Leelanau Peninsula neighbors. She might order raclette from John and Ann Hoyt of Leelanau Cheese Company, ask Matt and Carissa Visser of Isadore Farm about their upcoming harvest, check on the raspberry forecast for Bardenhagen berries. Set as her home in a divine junction of bountiful landscape and a legion of creative small-scale food producers, her culinary possibilities are delectably endless. After she’s sleuthed what’s available, Donaghy delights in fusing local ingredients with global cuisine—as in the below recipe for Northern Michigan squash with an Italian accent.

Oil a 9-by-13-inch casserole dish. Cut squash into V- to ¼-inch slices. Dredge squash in flour, salt and pepper mixture. Fry in ¼ inch of olive oil. Drain on paper towels. Salt lightly. Put a small amount of marinara sauce in the casserole, then layer squash followed by marinara, grated raclette and Parmesan. Continue to layer until squash is used up and end with marinara, grated cheese and Parmesan. Bake at 350 degrees for 30 minutes or until golden. Rest 10 minutes and serve.