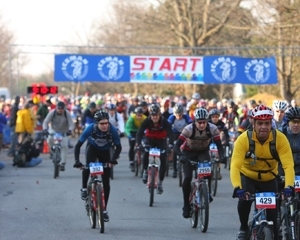 Northern Michigan Events: We know the drill. You're sitting at the computer, snacking on that fresh batch of Halloween loot. So long October, time to bring on turkey days and even colder weather. But most of all, bring on The Iceman Cometh Challenge! Per tradition, the 23rd annual mountain bike race gets down n' dirty the first weekend of November. So bring the whole gang to Downtown Kalkaska this Saturday, November 3, and see the 29-mile trail yourself.  But until the race kicks off, check out this round up of Iceman extras for the details!

Go straight to the event site for live news coverage leading up to the race! This is also the place to browse for Iceman apparel and merchandize, $10,000 of which will be awarded this Saturday. Not to mention the $54,000 in cash… Pocket change.

Sponsored by Bell's, the Iceman will definitely be a-flowin' with Northern Michigan's best beers. Read up on your favorite pint and see if it made the list for the race! Visit bellsbeer.com to see the latest in what's hopning.

Never been to the big race? Or maybe you just can't get enough! Peruse our coverage of previous Iceman Challenges, and prepare yourself for what's instore. Get right into the action with Iceman's 20th anniversary video, or take in a rider's perspective in this article at MyNorth.com.

And as always, may the best Iceman win!