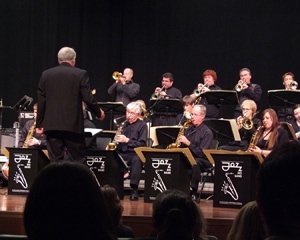 What’s a frustrated musician to do? In my case, join the NMC Jazz Band. Of course, using the moniker musician might be stretching it, or at least it was five years ago when I finally bit the bullet, pulled out the mouthpiece and found out that my horn still made noise.

The Northwestern Michigan College music programs are open not only to traditional college students, but to people from the community who still have that playing itch, or simply want to learn more about music. There have been so many interested parties over the years that eventually the college started a second band, so now there are two groups, the Jazz Lab Band and the Jazz Big Bands, as well as a vocal jazz ensemble (called, cleverly enough, the Vocal Jazz Ensemble).

I’d played at church a few times, but playing a simple part with an organ and 300 or so people singing tended to cover a lot of flubs. But playing in an ensemble? My last time had been with the Spartan Marching Band in fall 1979 at the Pontiac Silverdome. So stepping back into it was a leap of faith, and more than a little challenging. Fortunately I was still well-protected, as the sixth person in a four-part section. Hey, I wouldn’t even have to play at the concert, I could just dip my toes in – err, my lips in – so there was no pressure.

Then my fellow fourth part player disappeared, and the two third players had a death in the family, so guess who played at the concert? I made it through. As I recall, there was very little laughter, pained expressions or rolling of eyes, though I may be glossing things over. But Mike Hunter, the Director of the Jazz Ensembles at NMC, didn’t lock the doors when I showed up for rehearsals the next semester, and I’ve been returning ever since. Hey, I’ve even worked my way up to second chair! No matter that’s because at least ten other trumpeters have moved on.

The Jazz Big Band has been more or less intact with many of the same players for a number of years – a couple predate Mike Hunter and have been playing with the group since its inception some 30 years ago. But the Jazz Lab Band, in which I play, has a more fluctuating cast of characters. It includes more traditional students, who might be in the group for a year or two. There have also been some high school students taking advantage of dual enrollment, such as our lead trumpet player Bruce Lirones’s sons Brett and Luke, who filled trumpet chairs alongside their dad. At least until Luke bailed to become our guitarist, before following his brother to CMU.

Don’t forget the vocal jazz group. I didn’t, and a couple years ago I opted into that as well. Despite the fact that it’s almost impossible for me to read music for singing, because I’m not pressing valves or keys or anything … And then they go and put the tenors in that pesky bass clef! But you know, sometimes magic happens. That piece that gave you fits goes so well that you lose yourself in the music, and you play like a band! You get your head up out of the music and start watching your fellow singers and actually have a musical conversation.

Will that happen at our show next Friday? Hey, I hope so. I think it will at least in a few places. But you’ll have to come to see and hear for yourself. Then, if you have a horn you’ve put away for a while, or you are secretly a singer, you may want to stop in. Even if it’s only for one or two rehearsals.

The NMC Jazz Ensembles perform Saturday, Dec. 1 at Milliken Auditorium. The show begins at 8 p.m. Tickets are $10, $5 for students and children.