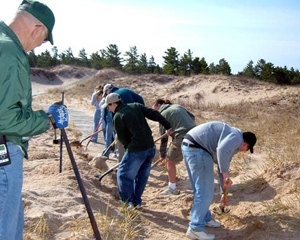 The Friends of Sleeping Bear Dunes is managing the maintenance of the Sleeping Bear Heritage Trail. A maintenance and visitor contact program has been established, which includes more than 40 volunteer Trail Ambassadors who ride, walk, or ski the trail identifying maintenance issues, removing small branches and picking up trash. Trail Ambassadors wear bright orange vests so they are easy to find if you have a question, need directions, or have an emergency. Heavier trail maintenance including tree removal, blowing leaves, and erosion control, is handled by our Trail Crew. This small group of ten people will also groom the trail for cross country skiing this winter. Grooming equipment has arrived, and the crew is being trained on its use. The John Deere Gator will have its wheels removed and tracks installed in November to pull the groomer. Now all we need is some snow!

The Friends of Sleeping Bear also leads and organizes the following efforts:

During August of 2012 Friends of Sleeping Bear conducted trail use counts and surveys. The results show that 85% of trail users are groups of family and friends. Since June 20th, when the trail officially opened more than 36,000 people have used the trail. Trail Use Surveys will be conducted as new trail is built.

Most signs and mile-markers for the trail have arrived and many are installed. The wood signposts are black locust, produced from trees removed from the Sleeping Bear Dunes National Lakeshore. Black locust is very resistant to decay and is an invasive species taking over large sections in the Sleeping Bear Dunes National Lakeshore, so the trees were removed by SEEDS Youth Corp and milled into signposts.

A group of students from the Leelanau School will be pulling mullein, an invasive species, along the trail between the Dune Climb and Glen Haven.

Next spring, a group of Traverse City West Intermediate students will plant native species in the intersection islands along the trail. These islands were created as a natural way of preventing vehicles from driving on the trail, but they will also be used to educate trail users about native plants and the hazards of non-native invasive plants.

For more information on the Friends of Sleeping Bear, or to get involved with trail projects, visit friendsofsleepingbear.org.

Photo(s) by Photo courtesy of nps.gov