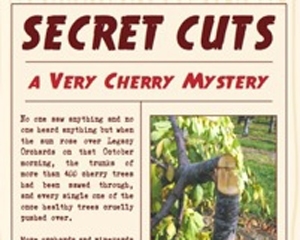 Link did raise the money, and went on to pen a long-form journalistic piece (somewhere between a magazine and a book) called Secret Cuts: A Very Cherry Mystery. We talked with Link about her project:

What got you interested enough to make this crime into a project?

I read the story in the [Traverse City] Record Eagle and Northern Express. Then weeks went by and I didn’t see anything else about it. I didn’t have a project at the time and I thought: I do research, I do investigative reporting. Why don’t I look into it and see if there is a story there?

But why this crime in particular?

I think what was especially devastating was the vastness of it. You know, 428 trees. And those trees were about to produce the following year. The Kroupas has been caring for them for six years and then nothing. They were about 10 percent of their orchard.

I’m not a large-scale farmer but I have a huge organic garden, I raise a lot of my family’s own vegetables. In the past I’ve raised my own chickens and pigs. I can imagine what this kind of loss would mean.

Let’s backtrack a bit. When you started Secret Cuts, you had just finished a major project about living off the land:

Yes, Bootstrapper. I can’t believe how lucky I am. I’d been working on another project, a crime story, and I contacted five agents with a proposal. On a whim I included an essay that had won an award in an essay contest about raising chickens with my kids after my divorce. Four agents wanted to represent the crime story and one agent said, “Send me more essays.” I did and she called me and said, “You’re a memoirist.” And if you want to write this I’ll represent you. I thought, “This lady is a go-getter.” So I signed with her and she had me write a proposal for the memoir, and she sold that to Knopf—seven other publishers also bid on it.

So after almost two years you were involved in Bootstrapper, and you were freed up enough to research the cherry tree crime.

Yes. Also, I’d been wanting to try something in E-publishing and this project seemed to dovetail nicely with it.

Secret Cuts was certainly internet-based from A to Z.  Tell us about that process.

I got the idea that it could be a Kickstarter project but I had no idea if people would be interested in funding it. Or what it would look like at the end.  Really what I was asking people to do is fund an idea—that’s what is cool about Kickstarter.

Sixty-three people backed me. Two people who I didn’t even know gave me $200 a piece. One of them is a writer and she lives in New York City—she had read some of my other books. The other person lives here and just thought it was a good project.

I hired an artist, Heather Shaw, to design the cover and format and download it to Amazon. You can purchase it in digital format or in print-on-demand hard copy. I also want sell print copies in cherry-themed boutiques this summer. I want people to know  [the region’s] farming history. Unless people understand that, they aren’t going to understand how devastating this crime was.

So the project is finished. Without giving away the story, where did your gumshoes take you?

It’s the weirdest thing. There were no clues. You could have gotten the reciprocating saw that was used at any Home Depot, Lowes, Menards. Usually with something like this people want attention, but that wasn’t the case. Also, the Leelanau County Sheriff told me that usually there’s some chatter about something like this, but nobody has said a word.

I had done a ton of research, I still didn’t know anything and I needed to finish the project. Then Jacob Wheeler, the editor of the Glen Arbor Sun suggested I Google eco-terrorism in Northern Michigan.  I did that and a movie came up called If a Tree Falls that played at the [2011] Traverse City Film Festival.  I ordered the movie and watched it—and at the end I recognized the song that played at the credits. I looked it up and the name of that song is “Cherry Tree.” It’s by an alternative rock band called The National. The lyrics go: “Loose lips sink ships … cut it down …”

Wow, what did you do then?

I called around to some psychologists to ask them if watching a movie like that could have this kind of an effect on someone. The consensus was that if somebody is going to do something like that, then they are, but the movie could have affected their timing. It might have given them a sense of urgency.

So that is my theory. Somebody with some kind of mental defect watched that movie and did it, I mean why else would you explain doing something like that?

For more information about Links’ other books go to Mardilink.com.