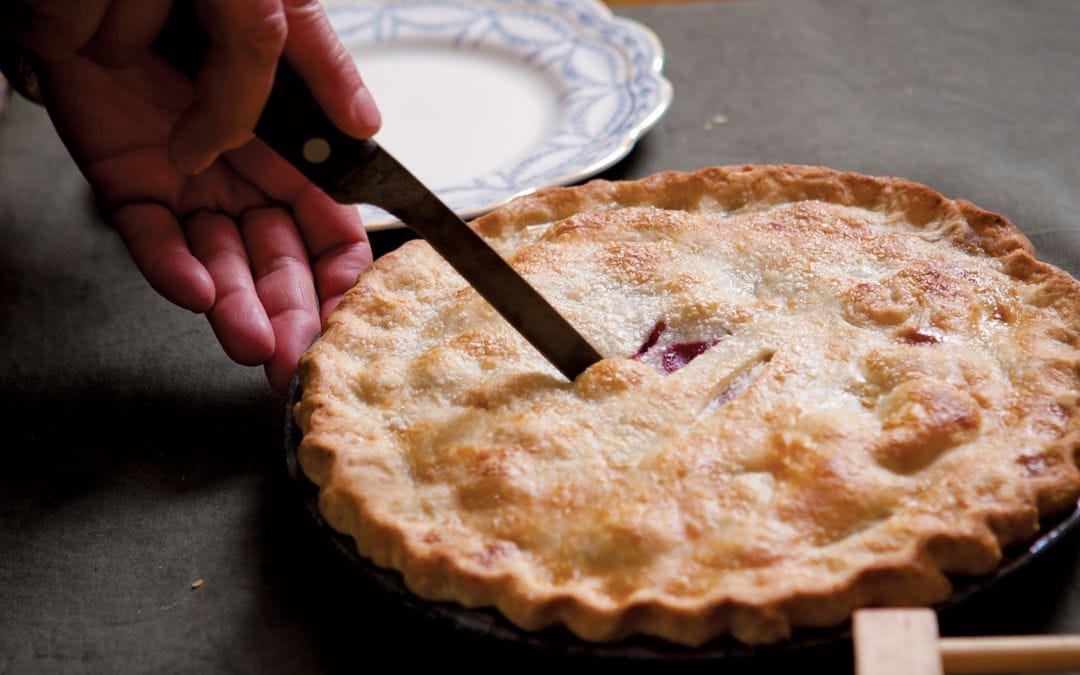 Watch Susan Odom of Hillside Homestead explain the ingredients and detailed technique for how to make a perfect pie crust. Want more—her process is also summed up in the words below. Also find links to six of Susan’s favorite pie recipes, perfect for the holidays!

My ingredients are very simple, 2 cups flour, a little less than a half-cup of leaf lard*, a pinch of salt and about ¾ cup water.

Put the fat in the bowl first—I like a bowl with high sides so it doesn’t get so messy. Pour the flour and salt on top of the fat. With clean, dry hands, gently but quickly mix the ingredients together; don’t press and knead because the heat from your hands and the pressure will make the flour and lard mix in a way that reduces the flakiness of the crust. This is why many recipes suggest cutting the lard into flour with two table knives or a pastry blender. Many recipes say to mix until pea-size clumps of flour and lard, but I find it is best to mix until clumps are about the size of kosher salt.

It’s time to add the water, a critical step that takes some attention. Pour a little water into the flour-lard mixture and then take a fork and mix a little of that flour-lard mixture into the water. Then add a little more. As you add water, scrape the wet mixture to the side of the bowl, so you are always adding water to flour mixture that doesn’t have any water yet. Keep going till the flour has taken up enough water without being too sticky. Using the fork, scrape the mixture it into a ball.

Dump the ball onto a board and divide it into two pieces. Gently press the dough into two small, flattened rounds and put them into the refrigerator for at least an hour. I don’t know why, but the chilling improves the end product.

*Leaf lard works best. Us freshly or locally rendered lard if possible. Typical grocery store lard has factory-added ingredients and tastes off. Lard should contain only pork fat. You can also substitute really cold butter for the lard. To find leaf lard, check with local butchers, like Traverse City’s Burritt’s, Maxbauer’s and Deering’s.