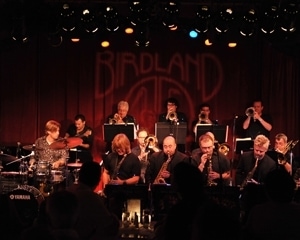 “No, it does not,” he continues, answering his own question. “But there is always room for greatness.”

Presumptuous? Perhaps. But if greatness is in the ear of the beholder, then Igoe and the Birdland Big Band need not take a back seat to any band in the world.

Drummer Igoe and his 14-piece band will throw down the gauntlet at the City Opera House in Traverse City Friday night, October 26, 2012. The 8:00 p.m. performance will showcase tunes from the group’s debut disc, “Eleven,” a roaring, rousing disc that aptly demonstrates the band’s freshness, vitality, and yes, greatness.

Comprised of veterans of the New York music scene, the band boasts standout soloists in every chair. But beyond chops, “Eleven” demonstrates the band’s collective approach.

“We play loud and fast and don’t dwell on the past,” says Igoe. “We’re unafraid to try it all. We’re hungry. And we’re just getting started.”

The band got its start in 2006, playing to what might be charitably described as small crowds. “We were on life support when we first began. The band outnumbered the crowd, but we didn’t give up,” Igoe says.

If it had, that would have been a shame. The band’s unique takes on material by Chick Corea, Herbie Hancock, New York Voices leader Darmon Meader, and Mike Brecker, among others, mark it as a force to be reckoned with. For example, the breathtaking unison runs of Corea’s “Got a Match” are set off by blistering solos by saxophonists Dan Willis, Nathan Childers and Matt Wong, trumpeter Glenn Drewes, bassist Tom Kennedy, pianist Kenny Ascher, and Igoe himself. It’s a true tour de force.

And while the band can certainly shout, it can play pretty too, as on Hancock’s “Butterfly.” The woodwinds, muted trumpets and percussion combine for a rich and pensive counterpoint to the material surrounding it.

Greatness? It’s hard to argue with the results on display.

“Greatness will be embraced,” says Igoe. “That’s what drives us. Folks spend their hard-earned money for a concert; they deserve to be blown away.”

This is the band’s initial tour outside the confines of its home at the famed New York City club from which it takes its name. Tickets for Tommy Igoe and the Birdland Big Band start at $32, $15 for students. Call the Opera House box office at 941-8082 or go online to CityOperaHouse.org.