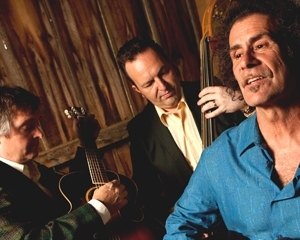 Traverse City Events: Dick Siegel is on tour with guitarist Brian Delaney and upright bassist David Roof as Dick Siegel & the Brandos. (The Brandos moniker pays homage to “What Would Brando Do,” one of Siegel’s signature songs.) See them live at InsideOut Gallery in Traverse City on Saturday, October 6th, 2012 at 8:00 p.m.

Dick Siegel is a remarkable songwriter. In 2001, Detroit public radio giant WDET added Dick Siegel to their list of "the most important and influenctial musical artsists in the history o f Detroit."

Brian Delaney is a much in-demand guitar guru whose wide-ranging tastes encompass pop, rock, roots-blues, and vintage jazz which he plays with the acclaimed Royal Garden Trio.

David Roof is an accomplished multi-instrumentalist with a a superb voice for harmonies.  His love of all music and his mastery of the upright bass, with its percussive possibilities, make Roof indispensable and drums unnecessary. Roof has toured nationally with The Starlight Drifters, as well as with Tom Maxwell of The Squirrel Nut Zippers.

Dick Siegel has been making music with David Roof for many years. When the two of them got together with Brian Delaney in 2006, there was an energy and chemistry that was undeniable. The three have been playing as Dick Siegel & the Brandos since — a perfect vehicle for Siegel’s songs and an exhilarating playground for making music.

Get your tickets to see this trifecta live! Click the Buy Tickets button below.