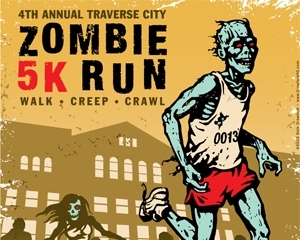 Traverse City Events: It's tough to get exercise when you're the living dead. So take advantage of this yearly Northern Michigan Halloween event and sign up for the 4th Annual Traverse City Zombie Run, a 5K walk/run for kids and adults at 9:00 a.m. on October 27th, 2012!

The Zombie Run has become a Traverse City favorite since its creation in 2009 and is well on its way to becoming a Northern Michigan Halloween tradition. What's not to like? Zombies and beer have always been a winning combination.

Over the last three years Traverse City has seen zombies from all walks of life, or should we say death. There have been wedding party zombies, zombies in tutus, baby zombies, and even Zombie Jesus made an appearance last year! The only thing that's never been seen is someone not having a good time!

As you may know, Right Brain Brewery has moved to 16th Street, the SoFo district, and the Zombie Run has moved with them. The run wouldn't be the same without our friends at the Brain, get it? Therefore, the race will be changing its route this year. The survivor/infected thing has also been scrapped. Even though costumes are never required we’re going all zombie. The more blood and guts, the better!

Remember to stick around after the race because the beer will be flowing. Who says you can't drink before noon? Besides, you’re already dead anyway!

All registered participants will receive a race t-shirt, professionally timed results, race bib, post race refreshments and entertainment.  Medals will be awarded to the overall top three male and female runners and age group winners. There will also be prizes for the best costumes.

Photo(s) by Photo courtesy of tczombierun.com