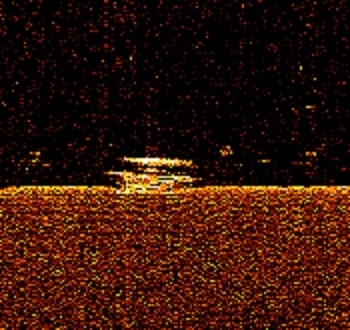 Nearly a century has passed since a little steam powered tour boat named the Rescue disappeared beneath the waters of Glen Lake, in Leelanau County. Over the decades rumors surfaced and stories circulated that the owner of the vessel, Ralph Dorsey, sank his beautiful boat on purpose.

Legend has it in 1914, Dorsey, son of Leelanau pioneer John Dorsey, navigated his beautiful steamboat to the middle of Glen Lake, with a little row boat in tow. He then took an axe and chopped a hole in the floor of the boat and let it sink. Rowing back to shore Dorsey passed some fisherman, who heard him mutter, “If they won’t ride with me, they won’t ride with anyone else!”

Differing reasons of why Dorsey sank his boat have circulated over the years. One theory says Dorsey’s tour boat business was suffering as rumors of his drinking problem spread through the resorts on Glen Lake, while another theory says nightmares of drowning children haunted Dorsey, so he sank his boat before tragedy could strike.

Yet another story says that Dorsey lost the boat in a card game and rather than turning his pride and joy over to the victor, he decided to sink it.

The Rescue was about thirty feet in length and sported a canopy top, as well as a small steam boiler, smoke stack and steam engine. The interior of the boat had mahogany bench seating for passengers, who were picked up from resorts on Glen Lake and given a lake cruise by Dorsey.

In June of 2003, the University of Michigan’s half-million dollar ROV (remotely operated vehicle) M-ROVER combed the depths of Glen Lake for two days as part of a joint expedition with students from the two local high schools—Leelanau and Glen Lake. An ice shanty, boat anchor and fishing pail were discovered, but the Rescue eluded the searchers.

The rumors may have been proved partially true in 2006 when a sonar team from the Michigan State Police found a boat about 30’ in length in one of the deepest parts of the lake while looking for a drowning victim that has yet to be recovered. State Police divers were said to have dived the wreck and possibly filmed it, though the footage was never made public.

Only two photographs of the Rescue were known to exist: one of these photos shows Dorsey and the Rescue cruising on Glen Lake. The other photo was actually of the Rescue sinking while Dorsey rows away in a small boat.

This September, Empire resident Dave Taghon and Ross Richardson, a Lake Ann resident, teamed up to film an underwater video of the long lost steamboat, and share the images with the public.

Taghon, a local historian, is also the president of the Empire Area Heritage Group, which just won a prestigious 2012 State History Award.

Richardson, a shipwreck hunter, diver and author, is best known for recently discovering a number of shipwrecks in the Manitou Passage and for recently penning the book: “The Search for the Westmoreland, Lake Michigan’s Treasure Shipwreck”.

“The wreck is intact and in extremely good shape” describes Richardson, “her wood canopy roof is still mostly intact and her smoke stack is still upright and undamaged.  The brass steam whistle, which measures about a foot tall, is in perfect condition and looks almost new.  Bench seats still adorn the Rescue’s interior, as well as the steam engine machinery and small ships wheel which used to steer the vessel.”

“What makes this wreck tough to film is the low visibility and a lack of ambient light.” Richardson complains, “Visibility in the deep section of Glen Lake on a good day is maybe eight feet and it’s very dark down there.”

Taghon and Richardson agree, the “Rescue” should be protected.  They aren’t disclosing the exact location or depth of the vessel, for the time being.   “It’s really quite a mini steam boat museum,” says Richardson “and it would be nice to keep it unmolested and preserved.”

Another issue the two agree on is the preservation of Glen Lake.  Glen Lake has been fortunate enough to escape invasive species such as zebra mussels and Asian milfoil, each of which has had detrimental effects on other lakes in the region.  Making Glen Lake a scuba diving destination may increase the chance for these pests to gain a foot hold in the lake.

Information, underwater videos and images of the Rescue are also available on Richardson’s website: michiganmysteries.com.