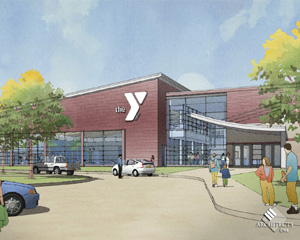 Northern Michigan News: If you've driven by the site of the new Grand Traverse Bay YMCA and wondered when the work will begin, we've got good news:

A year ago at this time, frustrated by an economy that had stalled our fundraising efforts at $6 million for a $12 million project, we launched an ambitious "now or never" campaign to raise the rest of the funds.

We set a deadline of December 31 and watched in awe as the community stepped up to help us reach our goal.

The bad news: To finalize plans, we needed more time.

We still had to finalize building plans, go out for bids and answer a thousand other questions that go into a project like this. Fortunately, we have a CEO in Tom VanDeinse and a board president like Marc Judge – along with many other people – who are tireless workers. They have spent hundreds of hours in the last six months making this all happen.

During the spring and summer, we board members heard this question many times: When is the new YMCA going to turn ground and when are you going to open?

We are beginning to turn ground now and we expect it will take about a year to get the building finished. We are tentatively looking at a Grand Opening date somewhere around January, 2014. If that seems like a long ways away to you, it really doesn't to those close to the YMCA.

Discussions about a new YMCA started more than a dozen years ago and in 2008 the Board of Directors sat down with a volunteer marketing group, came up with a plan and started our campaign. It seemed to be working well. We reached $6 million in pledges in less than 24 months. There was great momentum from the community to see this new Y built. Then the bottom fell out of the U.S. economy in 2009.

We were like a sailboat out in Grand Traverse Bay with no wind. But instead of giving up on the project, we became more resolved to see it through. There are so many people who came together to get this final push done it would be impossible to list everyone. As a former board president, I saw firsthand how these volunteers rolled up their sleeves instead of throwing in the towel. A year ago when the YMCA launched a "Hail Mary" pass to get this done, we didn't know if we could reach our goal. In fact, we concentrated so hard on the fundraising aspect of the campaign, we didn't sit down and look at the prospect of building a YMCA right away.

Now, there is a well thought-out and well designed building plan that will provide valuable services to our community for generations. Yes, the building isn't done yet….but like the old adage states "Good things come to those that wait".

A new day is just around the corner for the YMCA. We thank you for your patience and your perseverance.

We know this new YMCA will be a new beginning for hundreds of families and thousands of people in the Grand Traverse Area.